I've been gaining limited fame as an artist for a while, and I was making little sketches for friends and acquaintances left and right. Between December 2014 and January 2015, I had an idea to make memento prints, little original works that I could hand out to friends and other people I met in life. I thought such prints could take the "art gift" idea to the next level.

When I was younger (and single-) I used to make similar DIY gifts, not of my artworks, but of the cheesy B-Movies I'd made with my friends. I'd lovingly package them as VCDs (now a dead format,) with original cover art, and after loading twenty or more into my backpack, walk down Istanbul's busiest avenue and hand them out to all and any attractive ladies I came across, ripple-firing them like an attacking airplane on a strafing run - packets of information and narrative shot out in a swashbuckling quest for lust and social capital. But back to the prints now - here is how I designed them: 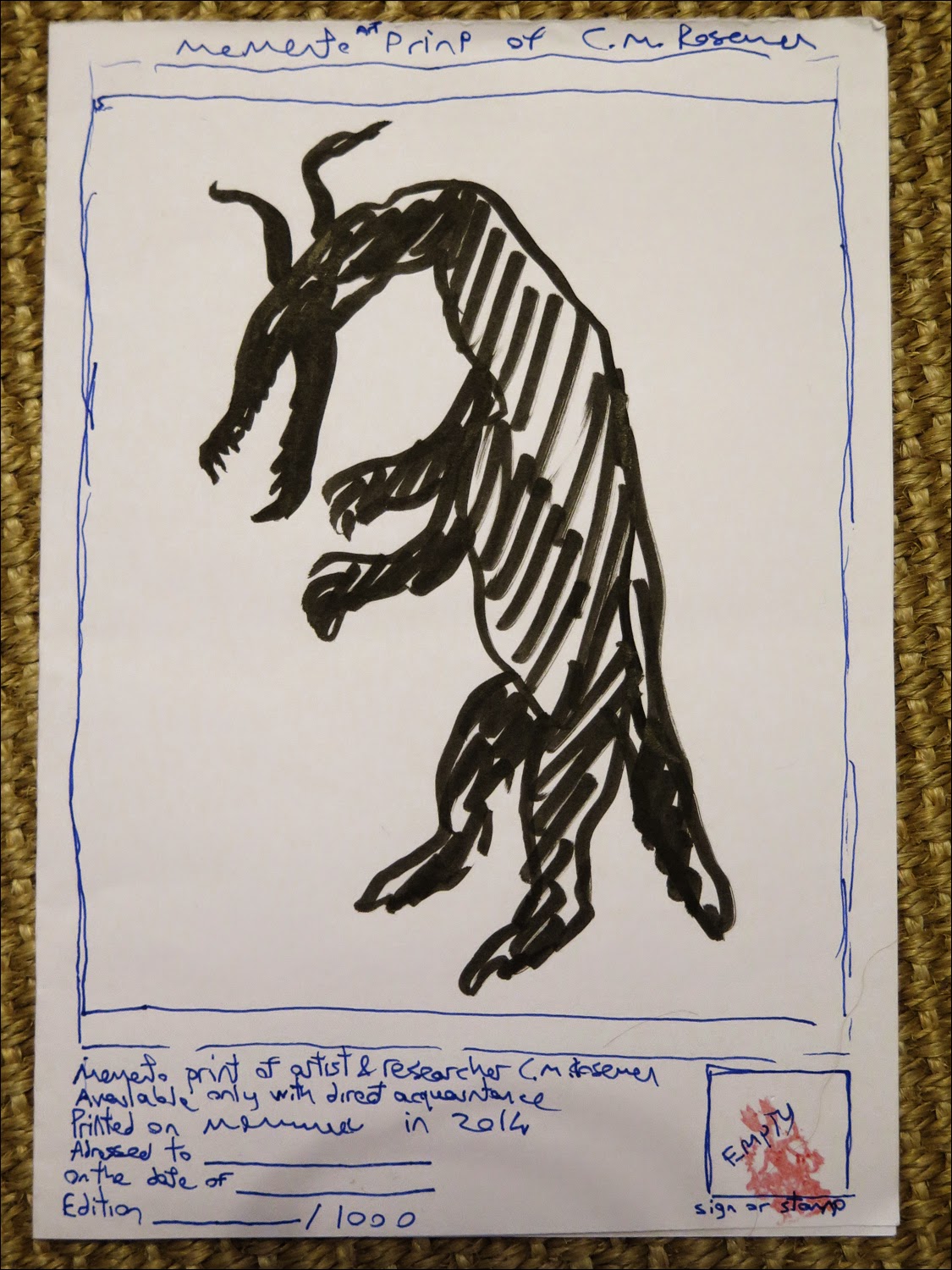 I started with a simple, A5-sized sketch. I had no idea about the main design - I mostly wanted to see which details I should include in the area below it. I wanted my prints to have blank areas I could fill out for their recipients, their date and edition numbers. I also added an official-form-like section which I could sign, or imprint with my personal stamp. 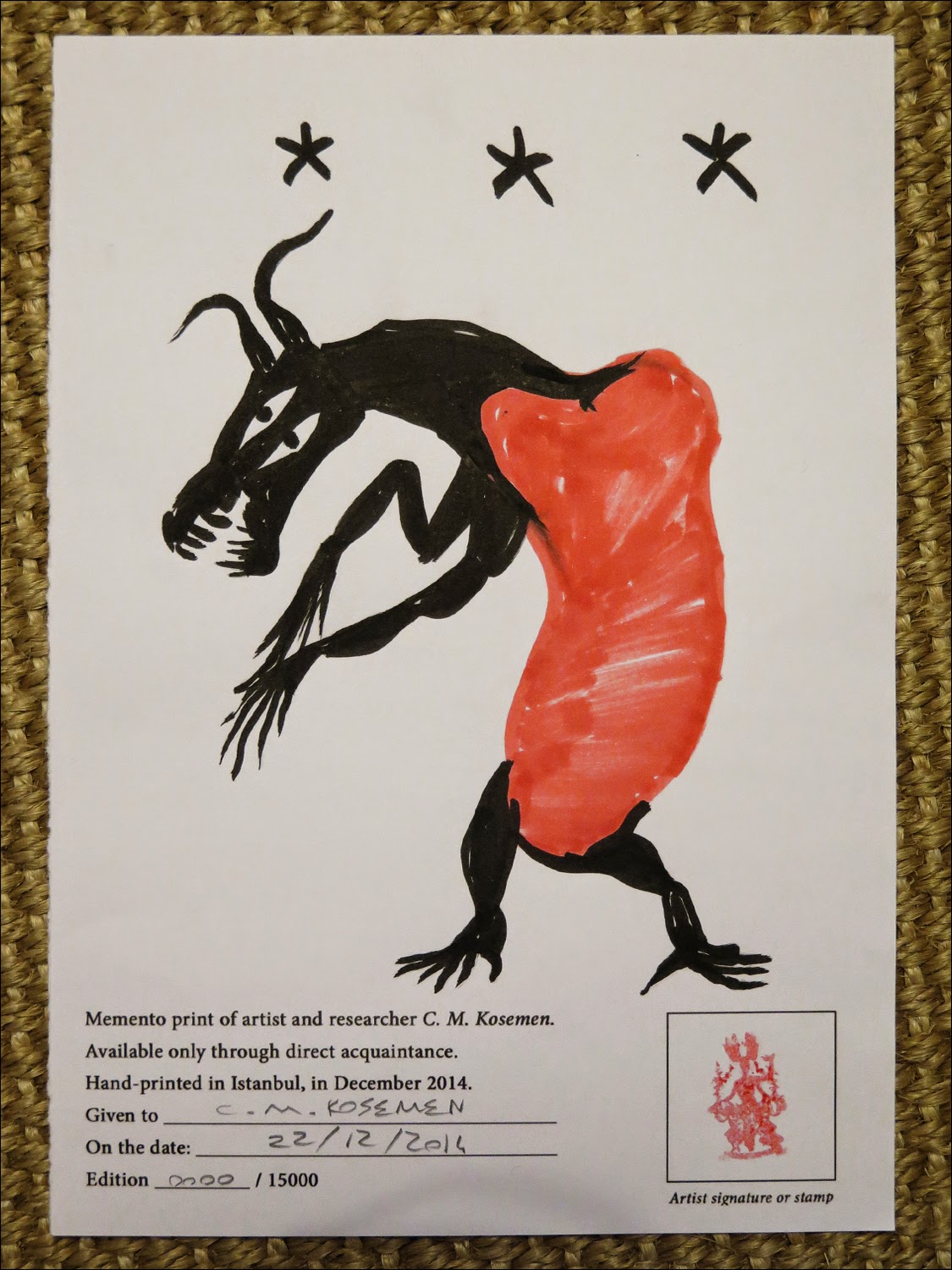 I then started working on the design. I first sketched out this toothy, crocodile-like beast. 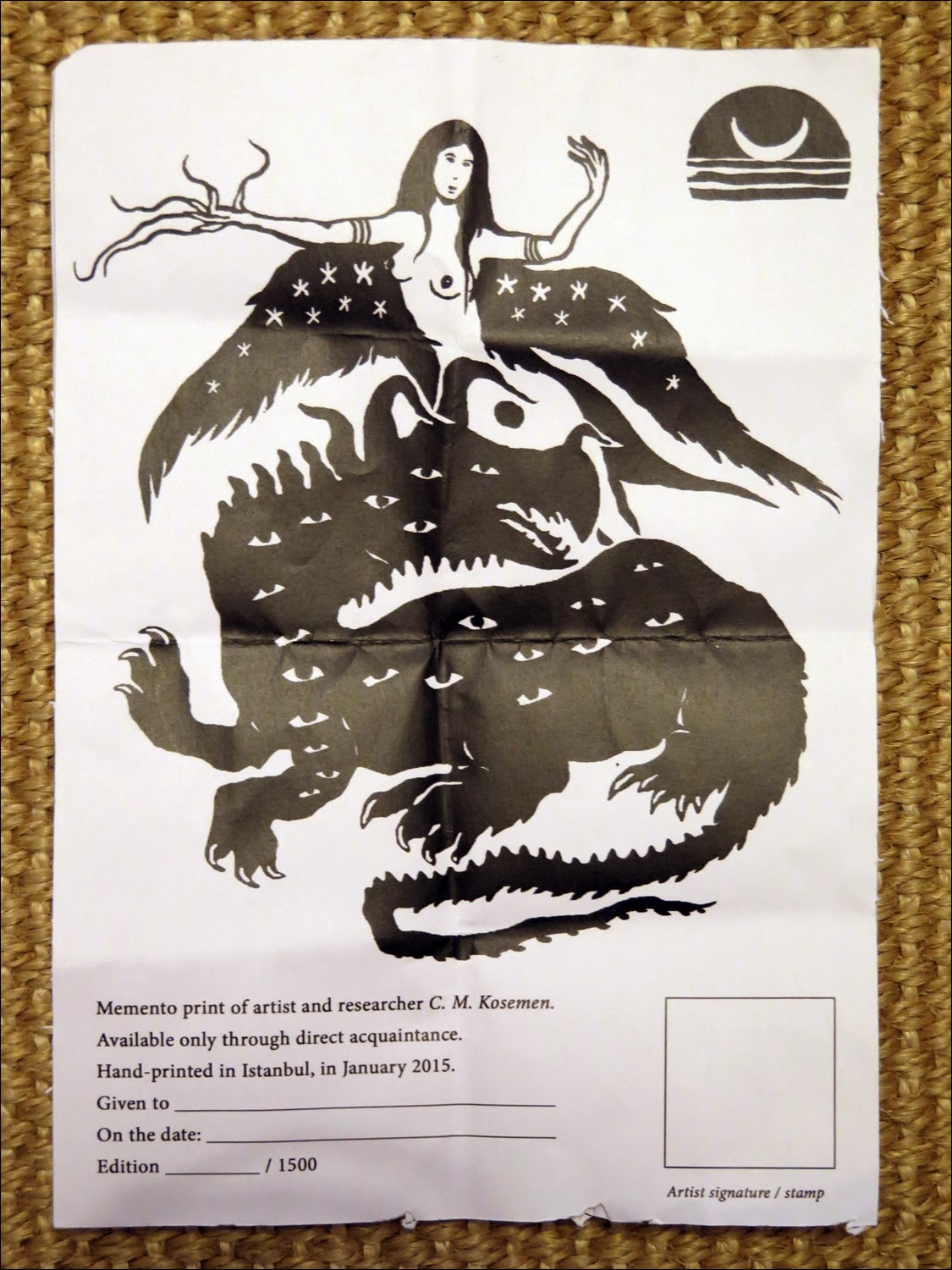 Over successive versions, I turned the creature into a six-legged, dragon-like beast with many eyes, and added other details such as the moon, and a black-winged angel figure. 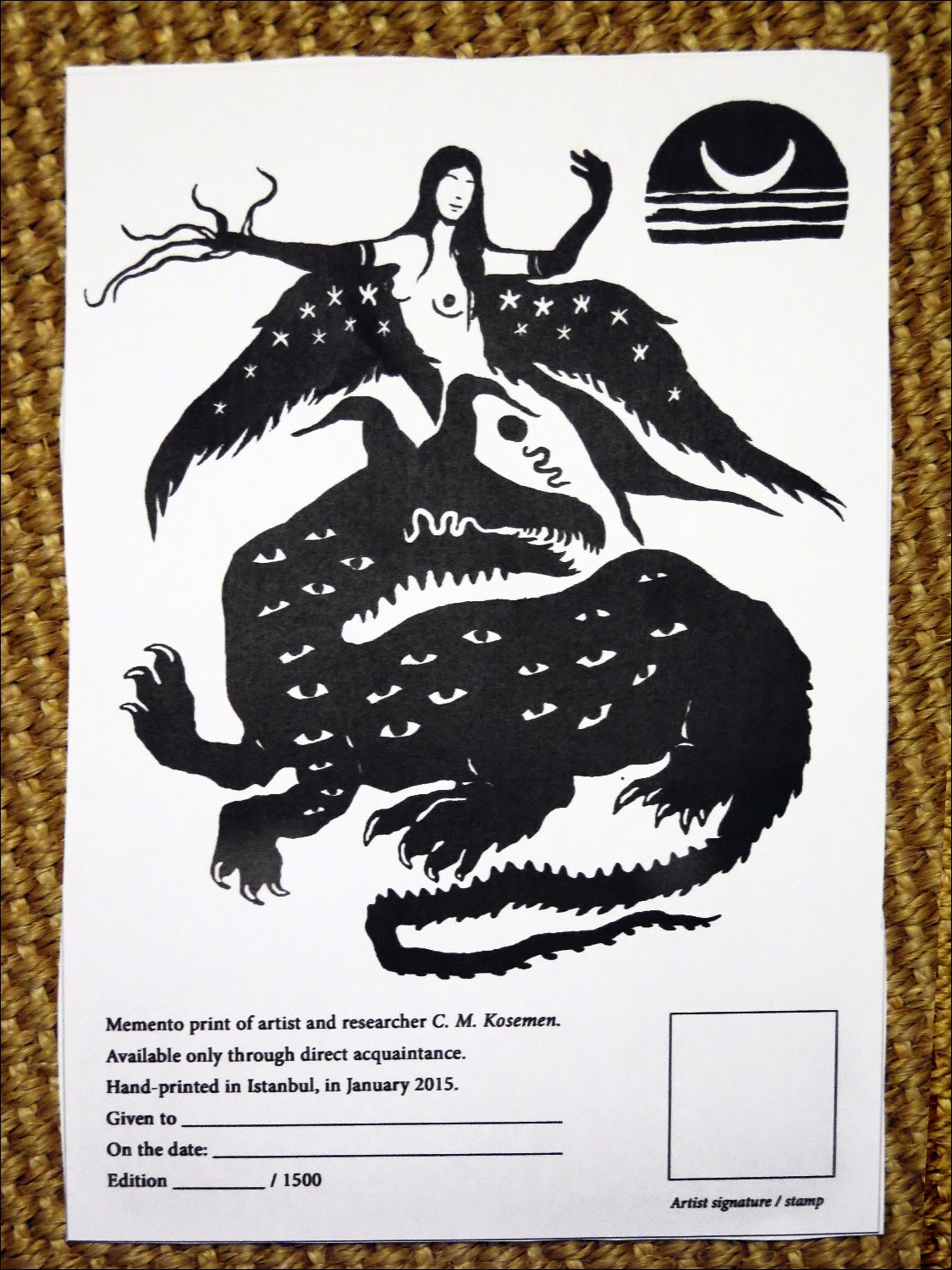 In this version, I cleaned up certain excessive details, such as the many horn-like protrusions on the creature's back, and parts of the hair and the face of the winged figure, which had caused her to look unintentionally like Cher or Nicki Minaj. But the image still looked too cluttered. 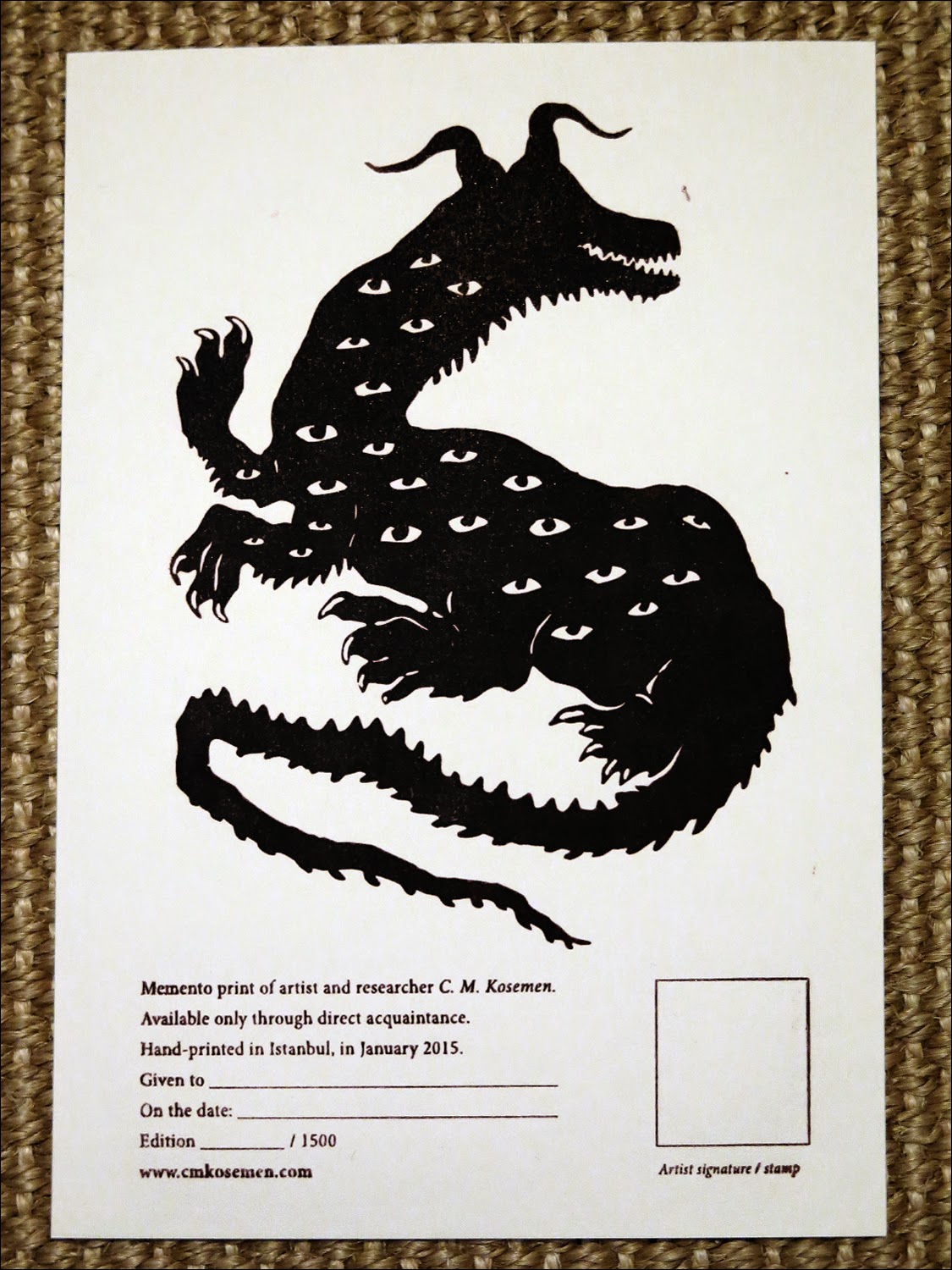 In one bold step, I returned to my original sketch and got rid of all the excess figures around the monster. The print was much more impacting this way. I also added my website to the bottom of the card. 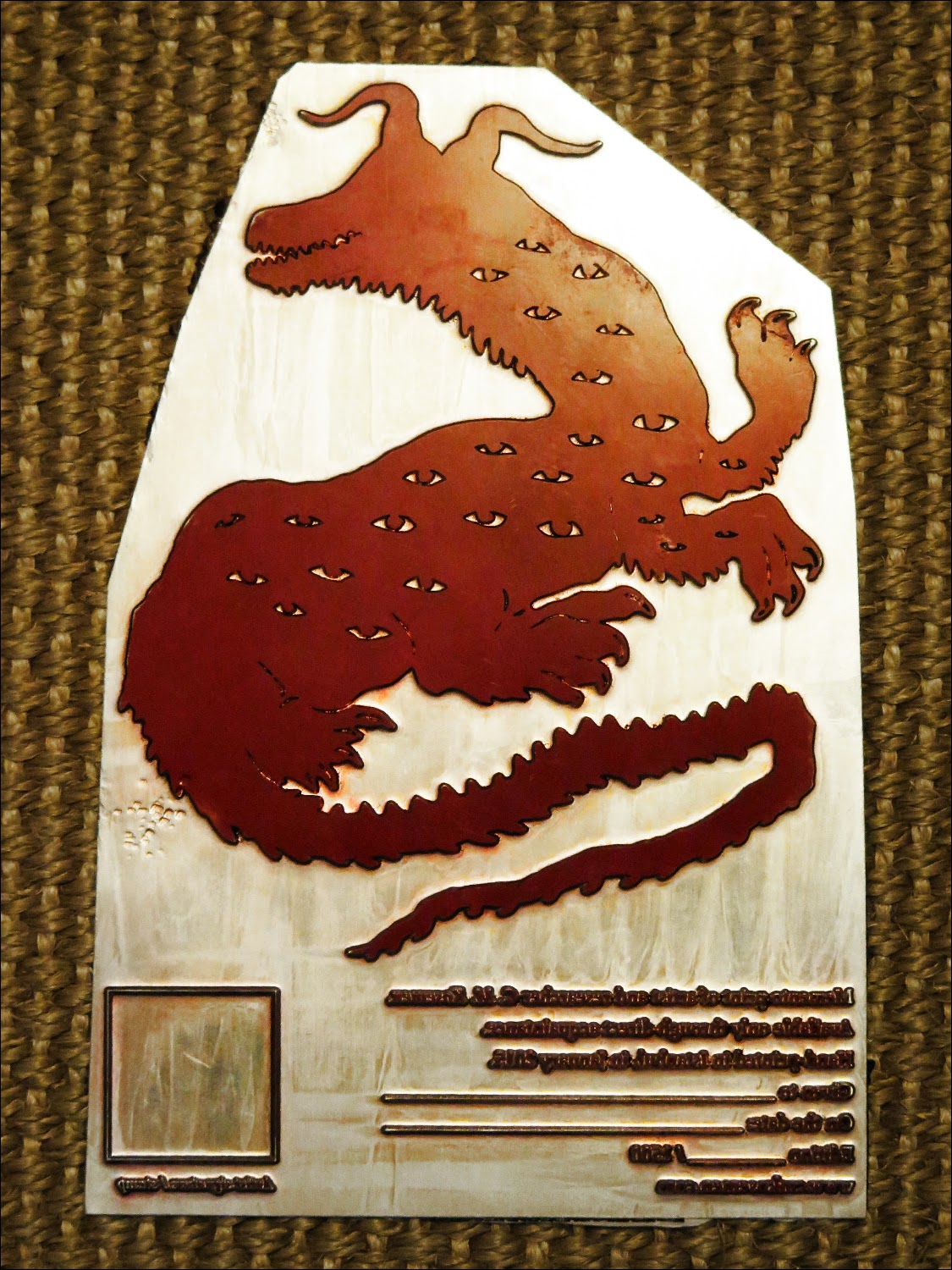 Next, I went to an old-fashioned print shop and produced an aluminium plate to print my cards. 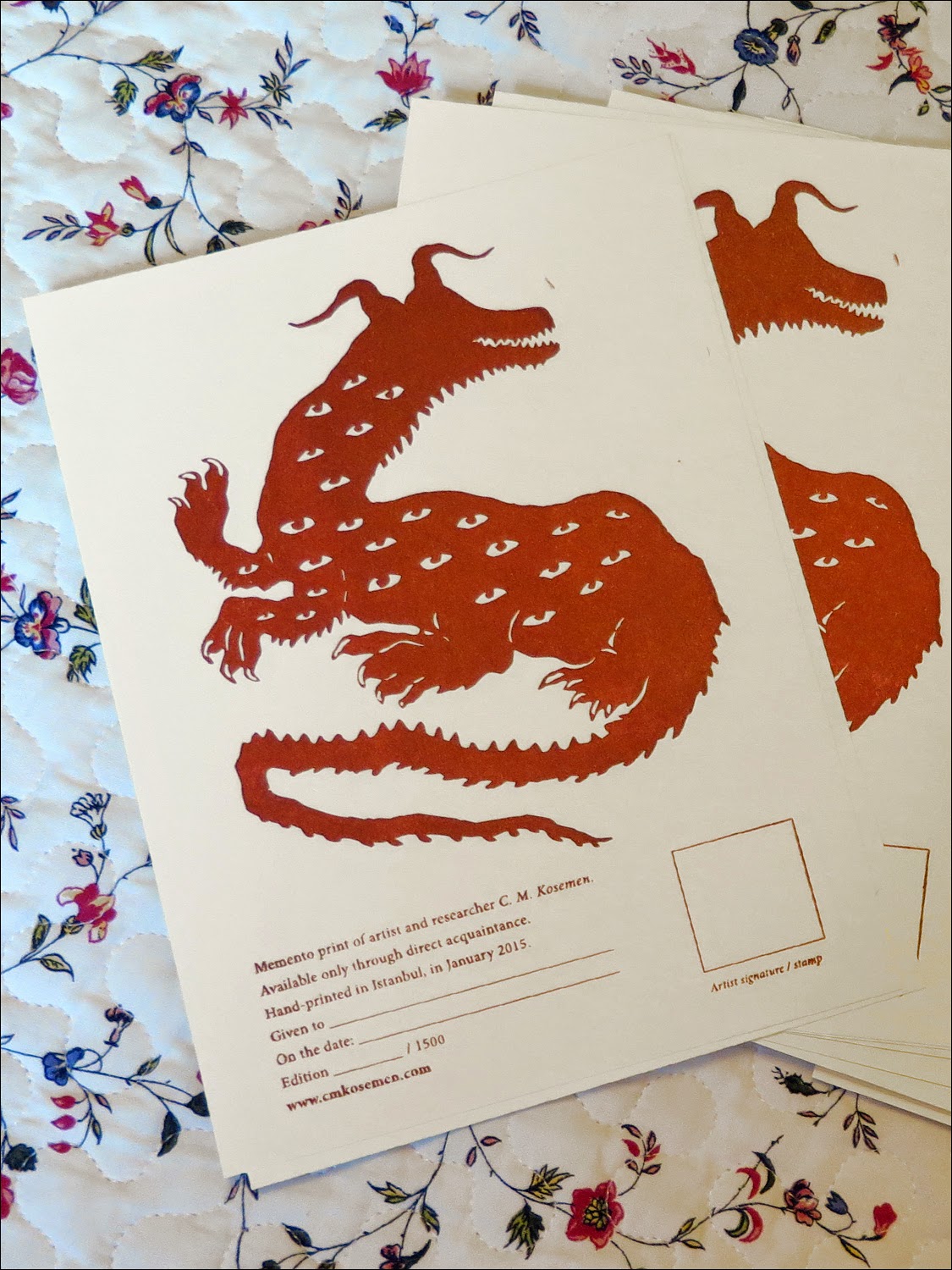 I had over 1600 copies of my memento print produced. 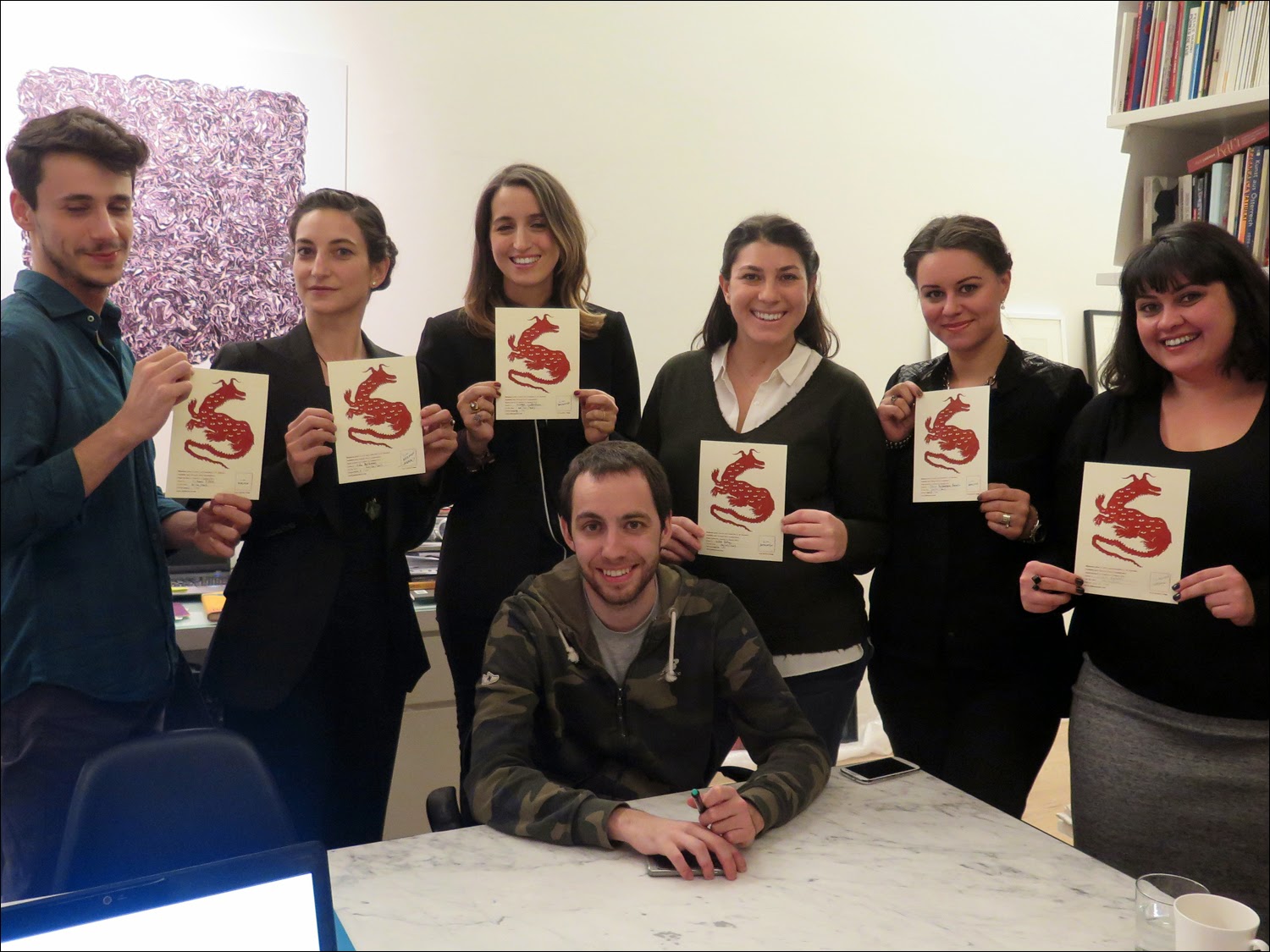 Since printing them two weeks ago, I've made a habit of carrying several dozen copies of my prints, as well as a log book of their editions, on my person at all times. The prints work amazingly as social ice-breakers and conversation pieces, and are becoming very popular among my friends. If you meet me in person, I may give one to you as well. 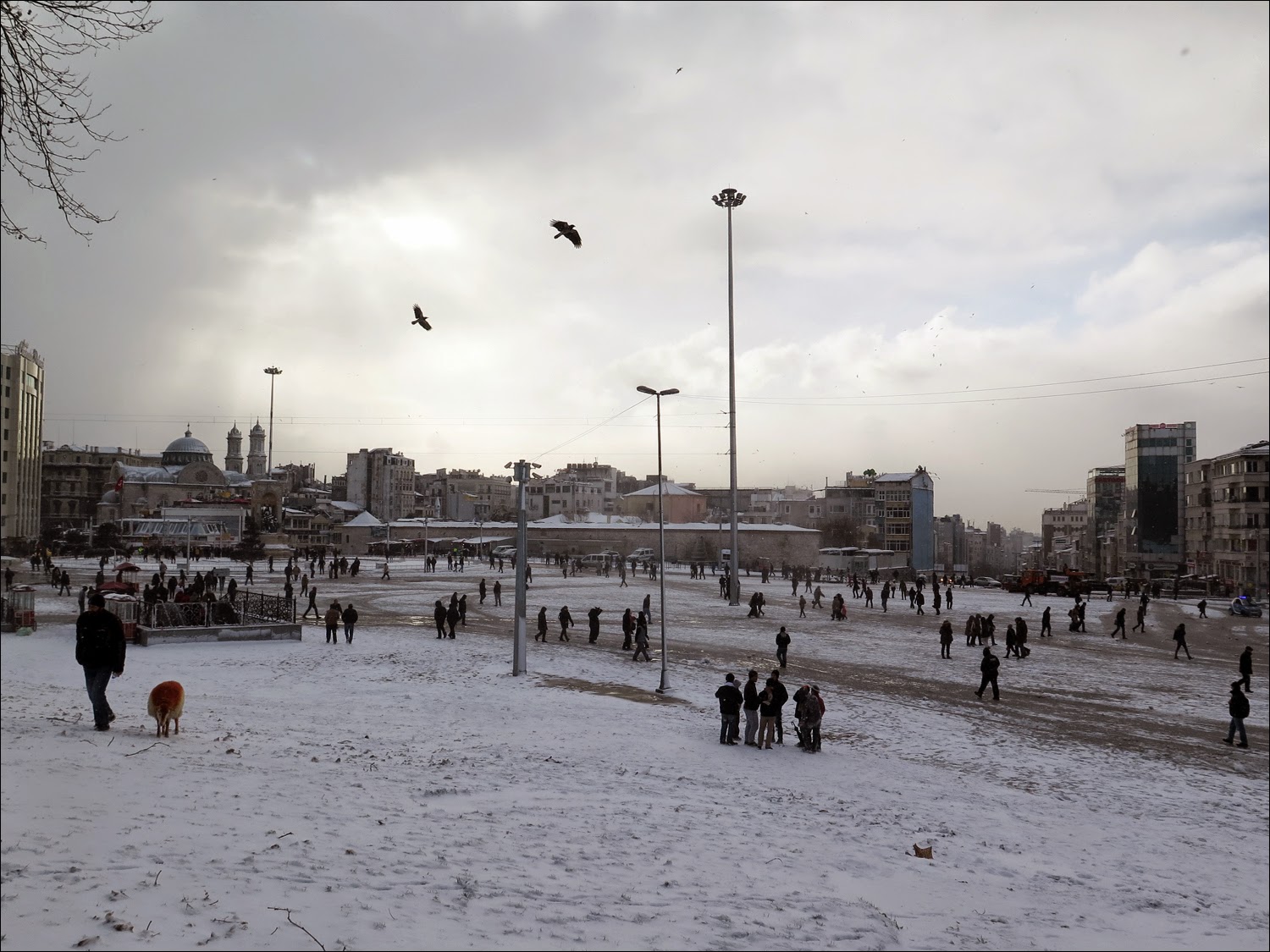 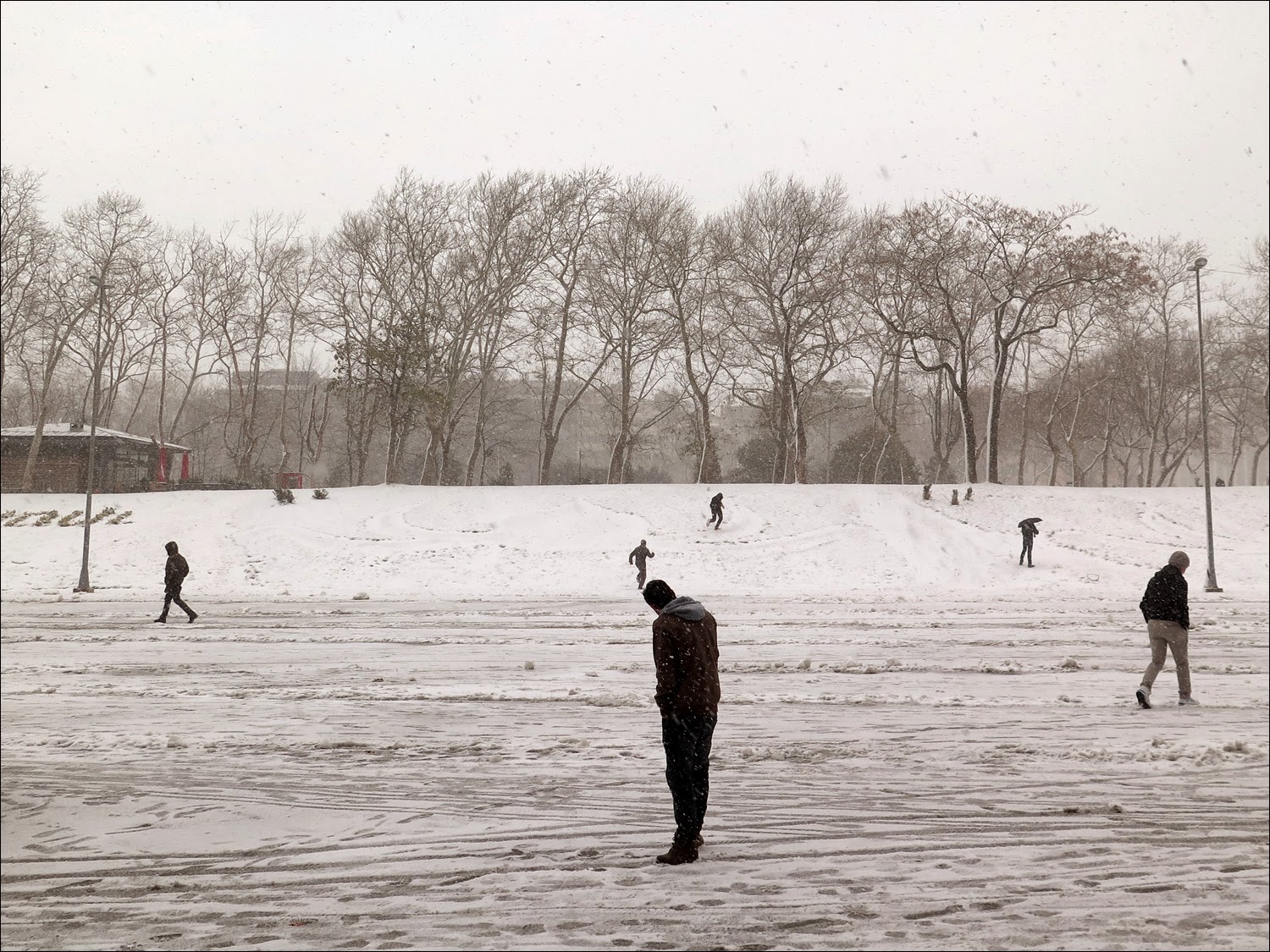 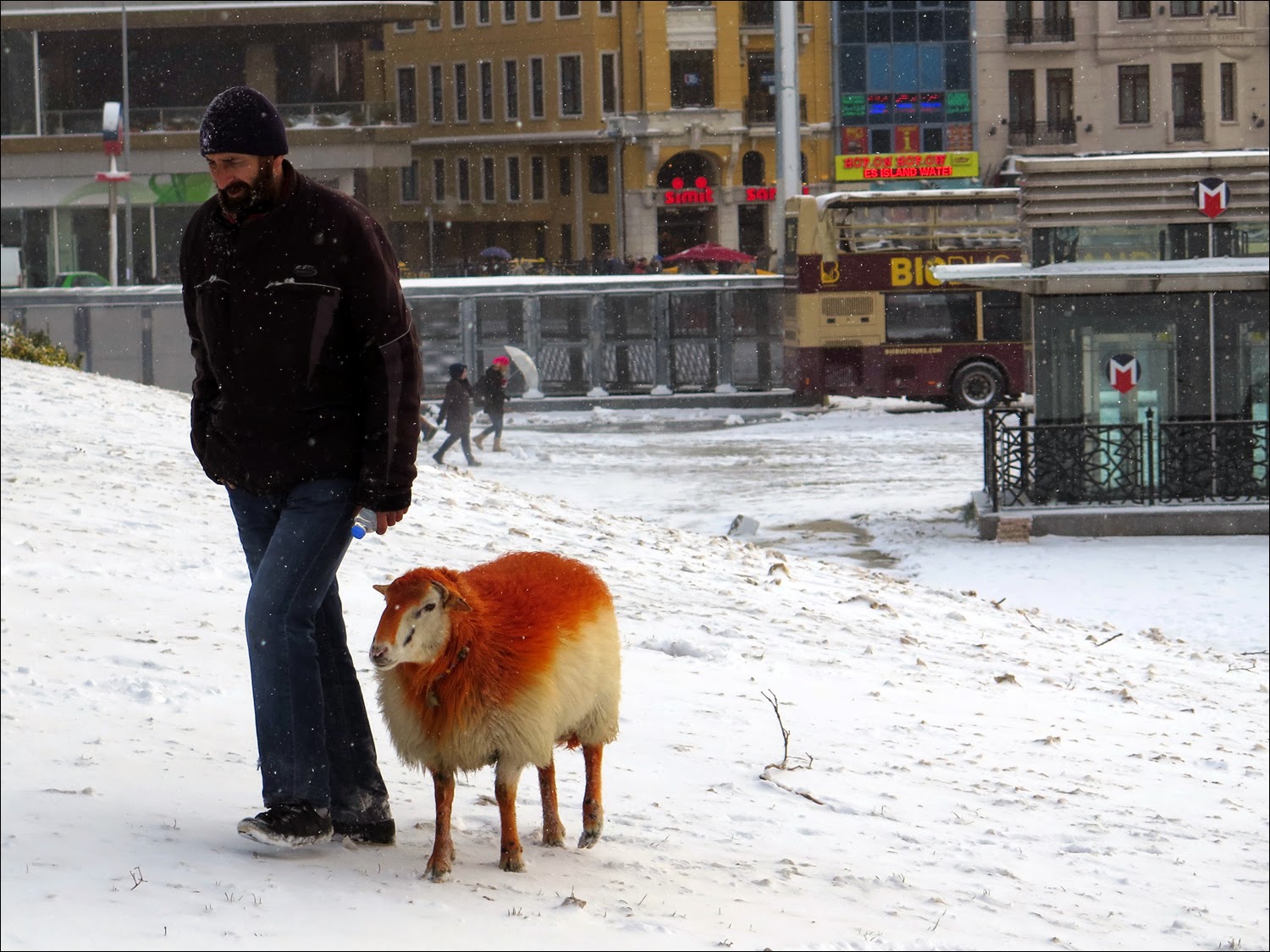 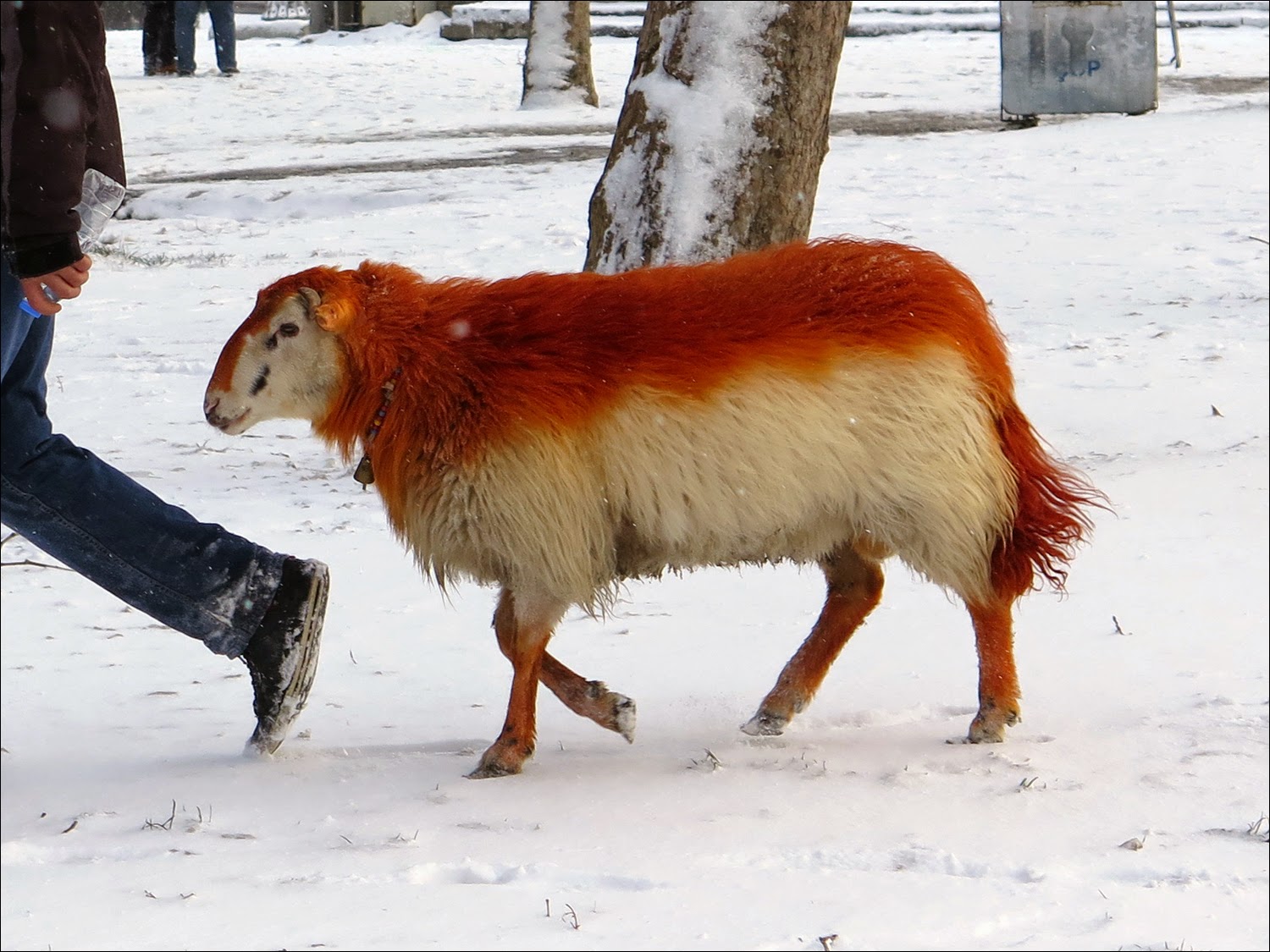 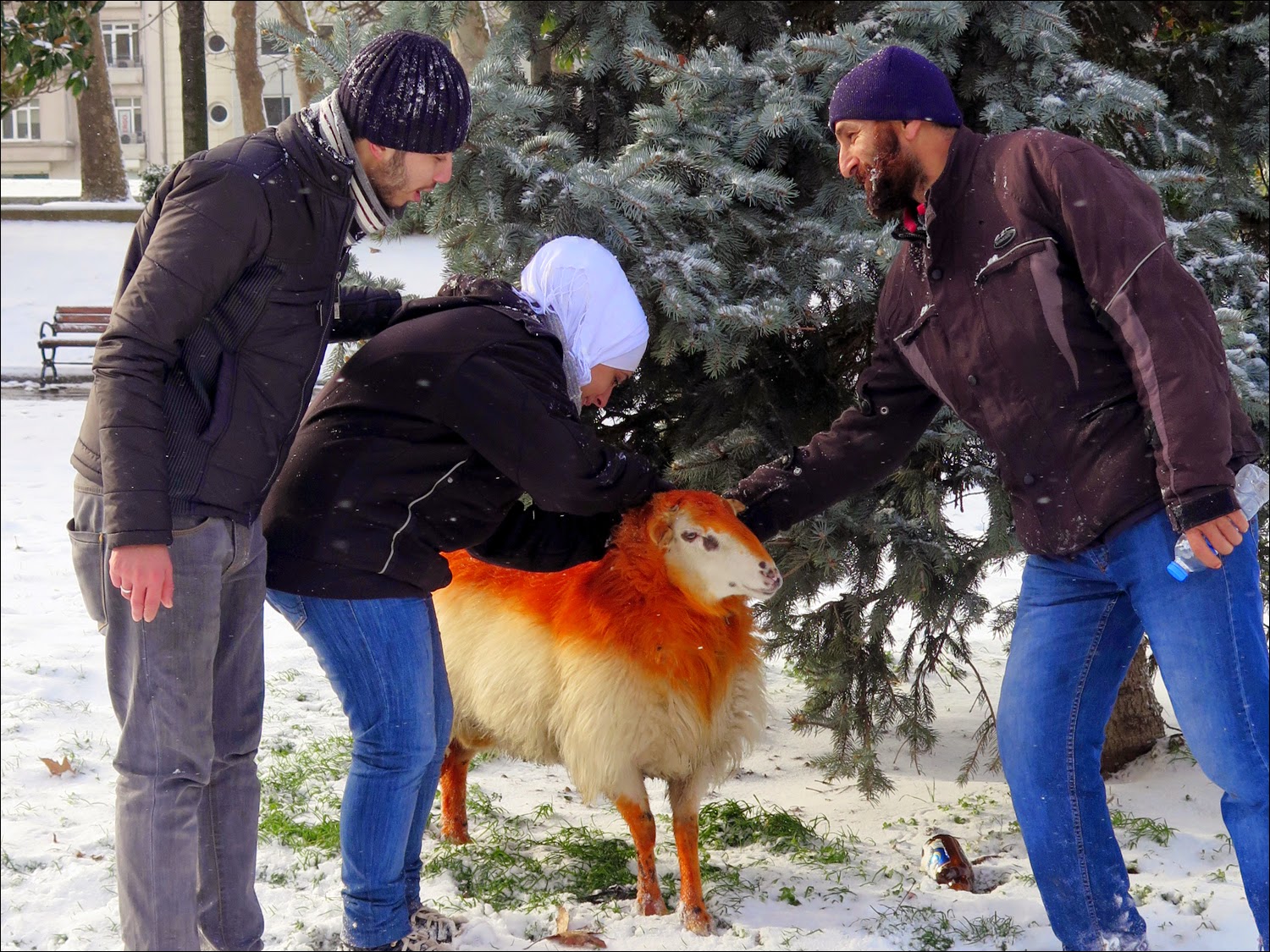 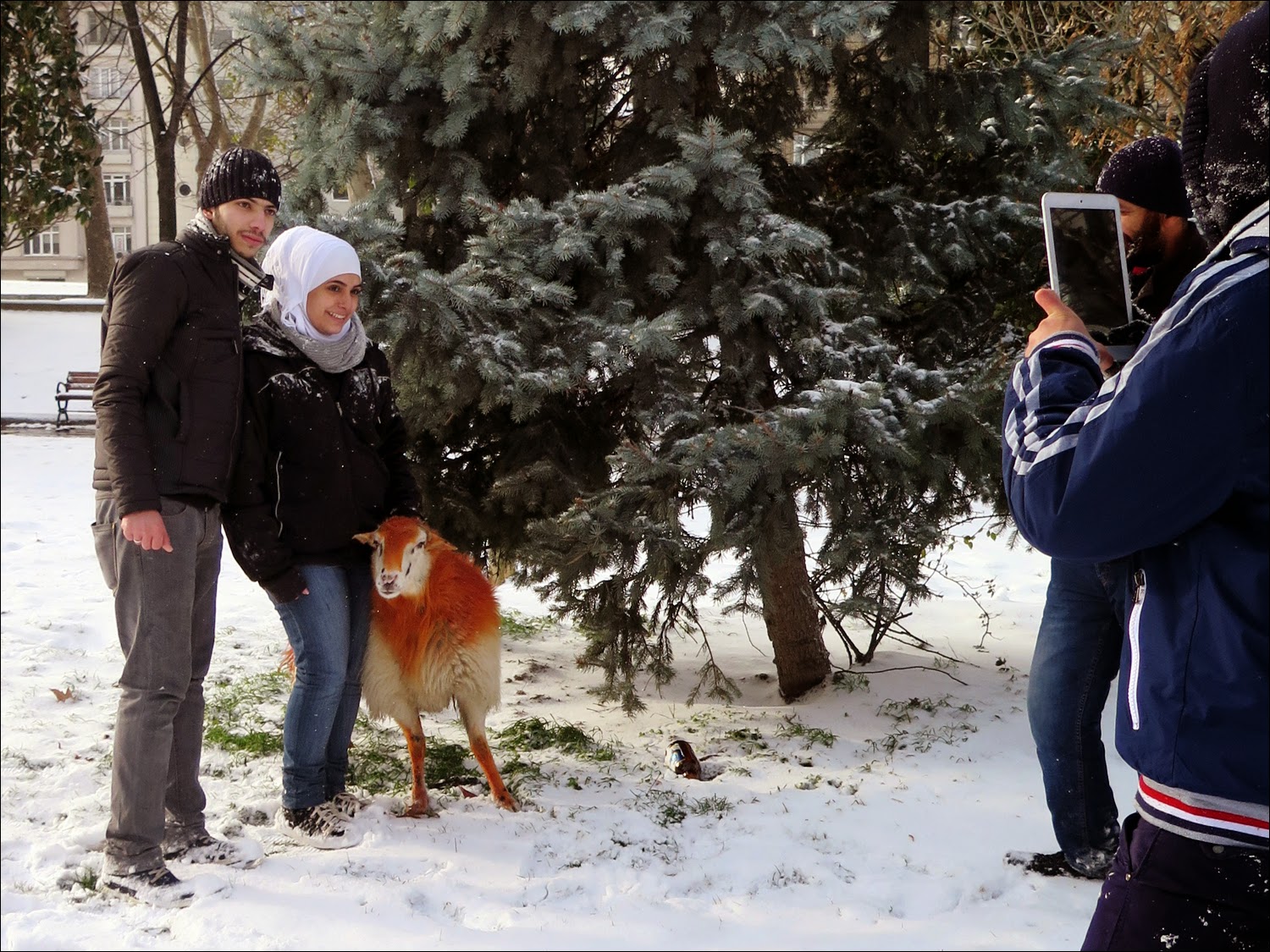