On August 2011, I decided to beautify my house with a big artwork that would completely cover one of my walls. The only problem was that I didn't have the resources to make a full-size, paint-on-wall mural. After some thinking I got inspired by movie posters from Ghana, which are painted on folding wood panels and propped up against walls to attract people. Deciding to make a something similar, I went to work.

I wanted to have a huge, dominating figure in the middle of my living room, so I based my painting on the fantastic figure of Baphomet, the fictitious, demon-like entity that was supposedly the center of secret Templar and Masonic rituals. 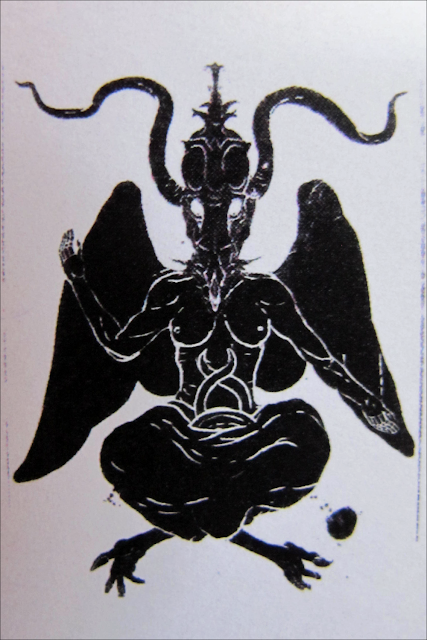 I quickly came up with this sketch, substituting an insect-like face in place of Baphomet's original goat-like mug. I also gave it vaguely dinosaur-like feet. 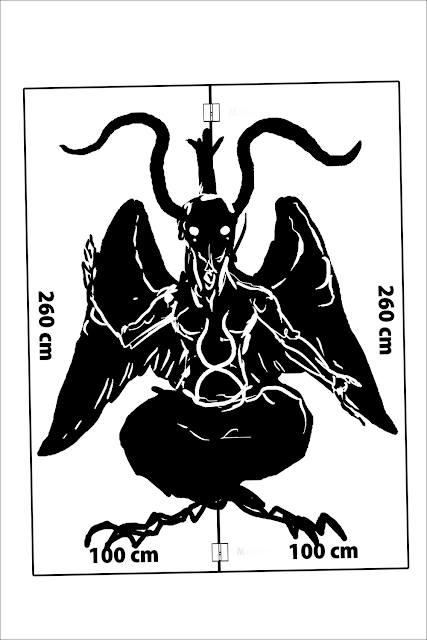 Next up was the construction. I found a local wood shop, and ordered a 4mm. sheet of hinged fibreboard in the dimensions above. 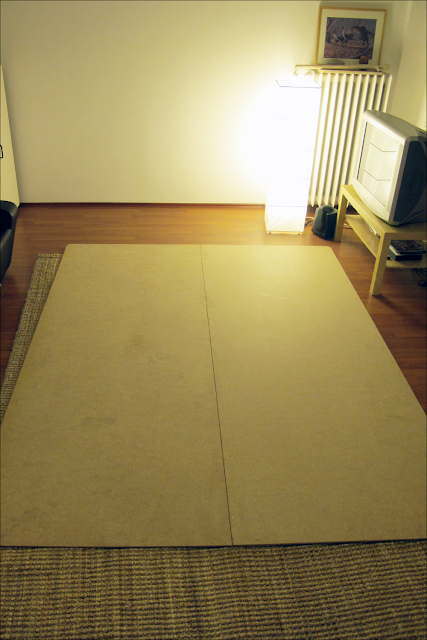 I got the board, evacuated my living room of furniture and started working... 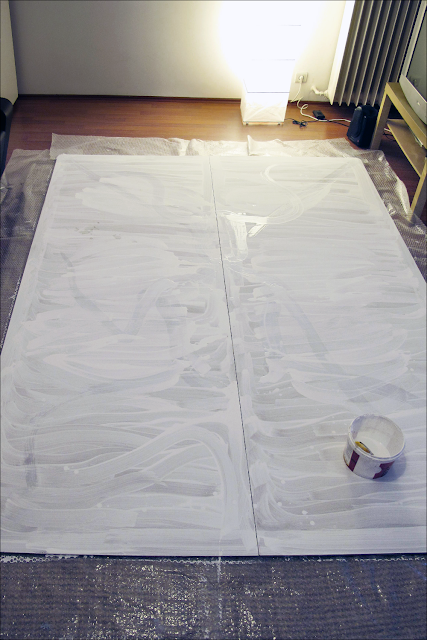 First up was a primer layer of white paint. I applied 2 successive layers of white house paint to completely cover up the brown color of the board. 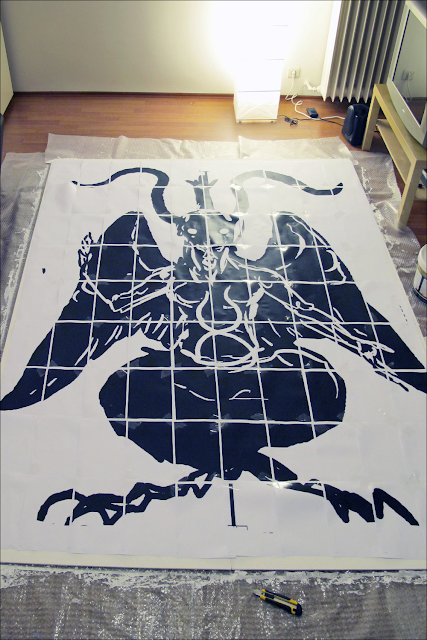 Next, I printed my sketch out as a big poster, made up of a succession of A4 sheets. For this, I used the brilliant Rasterbator service, which quickly enables you to create posters of any size for free, from any image. By placing the poster on the board and going over its edges with a thick, paper-permeating ink pen, I was able to get the key points of the figure onto the board. 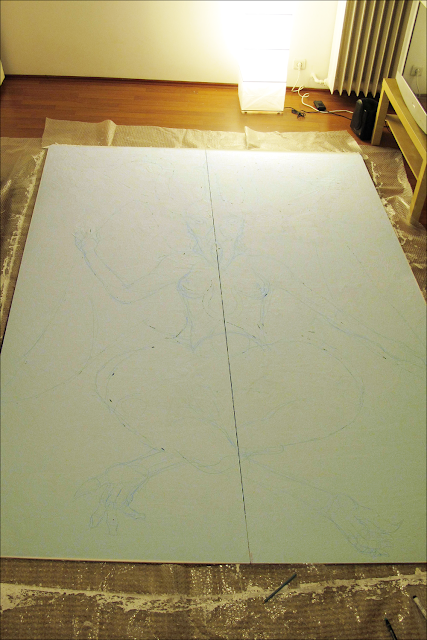 Using the key points, I sketched out the general form of Baphomet - seen very faintly here in blue pencil. 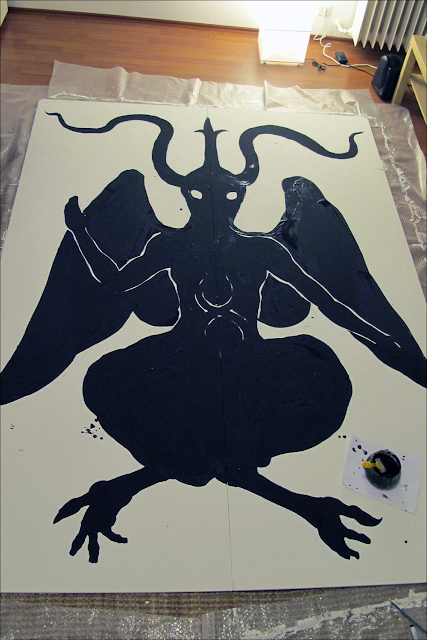 Then, it was fun time! I painted the figure in full, covering everything in black acrylics. I sometimes think I should have finished the painting there - the slightly unfinished look had given the picture a delicious immediacy at this stage. 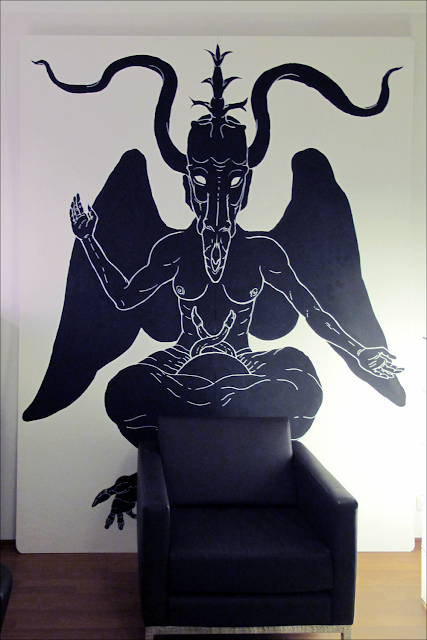 Immediacy notwithstanding, I then etched out finer details by drawing on the black outline with a white acrylic ink pen. I finished by cleaning out blotches and irregularities with white paint again. 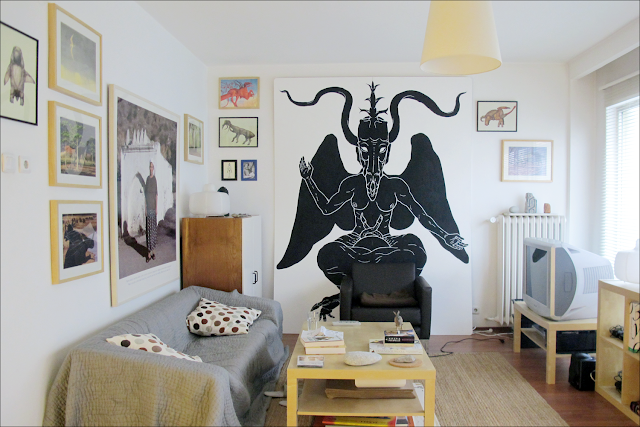 Thus completed, Baphomet stood in the middle of my living room for two years. Together we had many guests, and many friends were impressed (or scared) by its beauty. At one point, one visitor actually ran away, assuming I was a creepy demon worshiper or something. Of course, I did not worship anything - I'd chosen this figure simply for its beauty and elegance. As time wore on, I hung more artwork and the prints of my favourite artists around the Baphomet painting, and my home assumed the delightful atmosphere of a Renaissance curiosty cabinet. 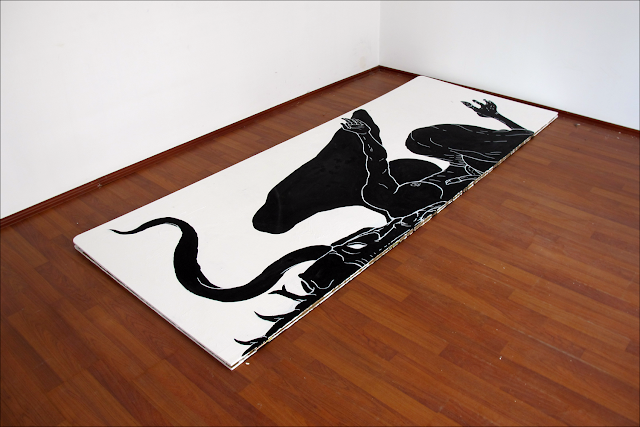 But this "delicious atmosphere" was not permanent. A few months into 2013, the building I was living in was designated for a structural overhaul, and I had to moved out. Because of the sheer weight of the board, (more than 60 kilograms!) I could not take Baphomet with me. My last glimpse of it was this poignant shot, as the giant painting lay folded in half, almost waving me goodbye with its outstretched hand. From there on, I abandoned Baphomet to the mercy of the apartment's new tenants. 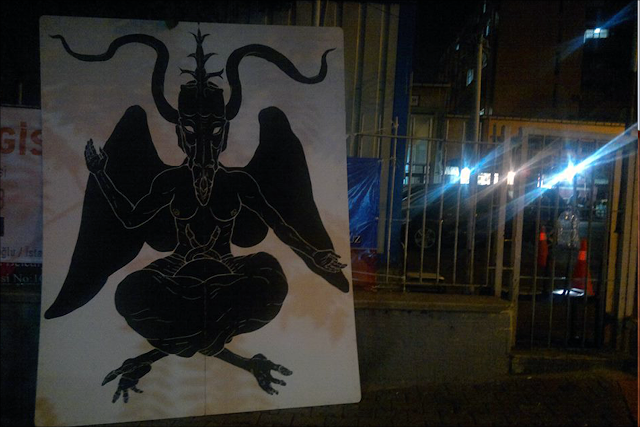 A few weeks after I moved out, Baphomet surfaced again, this time as a semi-viral photo on Facebook. Someone had removed it from my old apartment, and propped it against the door of a nearby hospital. Someone I'd never known took its picture and posted it online, assuming it was a work of protest for the Gezi Park events that were raging in Istanbul at the time.

From there on, the Baphomet artwork disappeared forever. I can only hope that some other art aficionado rescued it from its fate on the streets. 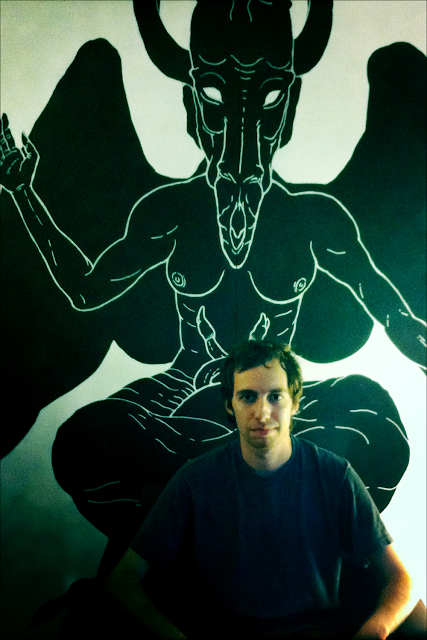 Regardless, it has been an exciting two years with this artwork and I still feel a little guilty about not being able to take it with me. Thankfully, I still have copies of the original image as digital photos, and hopefully someday, I can resurrect Baphomet in my new home.

In 2011, I came across this strange cat-like device in Cihangir, one of Istanbul's posh "intellectual" neighbourhoods. The mystifying machine looked like a toy, or some weird kind of Hello Kitty memorabilia. It was attached to the entrance of an underground parking lot. 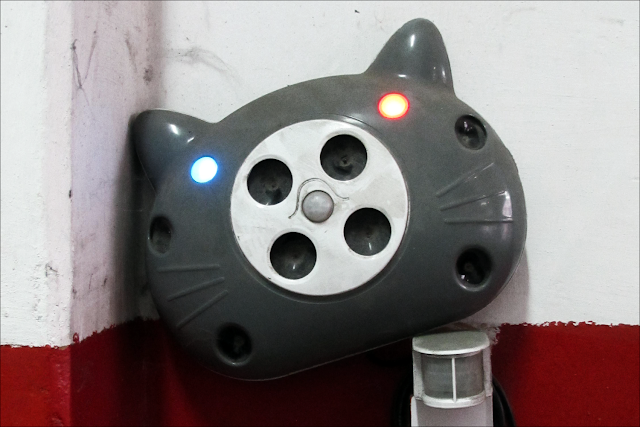 I asked some people working at the parking lot about the device and they illuminated my mystery; the thing was an ultrasonic cat repellent. When cats triggered the attached motion sensor, the device warded the felines off with a loud frequency that only they could hear. 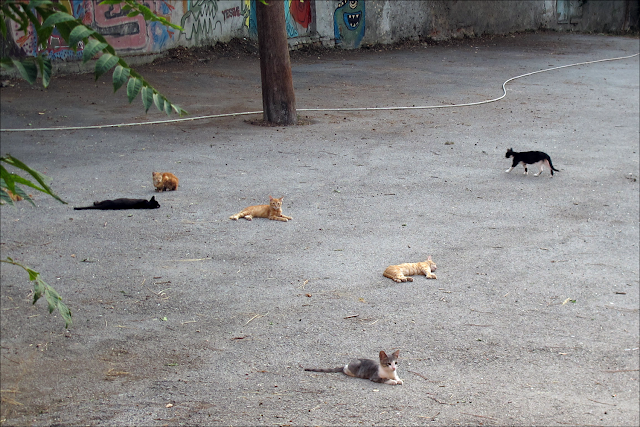 Istanbul, and Turkey in general, is very cat-friendly. There are thousands of the cute animals in the streets and they are almost always well-fed by the people in their neighborhoods. One wonders why this came to be so; few other places on Earth are so friendly to cats. A hint may come from the story of Muezza, the Islamic prophet's pet cat. Following the Prophet's tradition, Turkish Muslims may have treated cats better than the most. 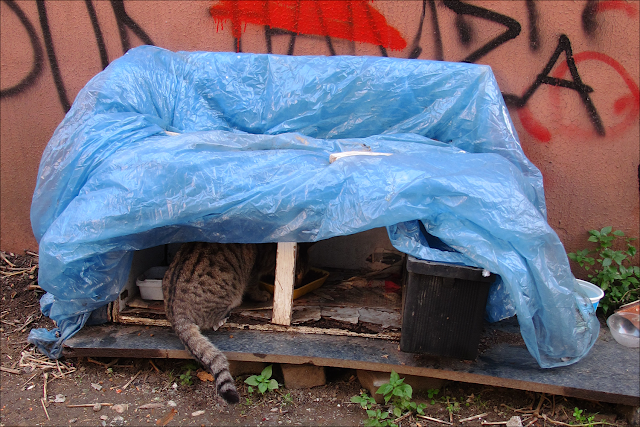 Makeshift cat shelters in many street corners are another evidence of the love Turkish people have for these animals. In certain cases, the shelters' DIY architecture was also quite interesting to behold. 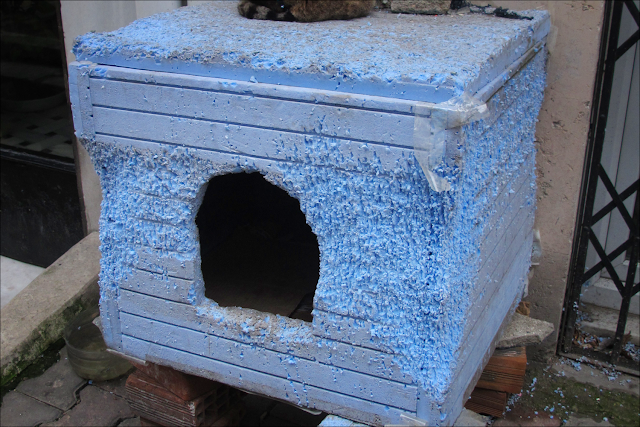 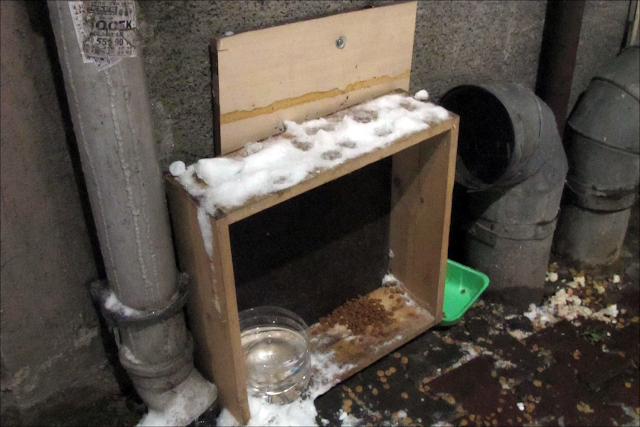 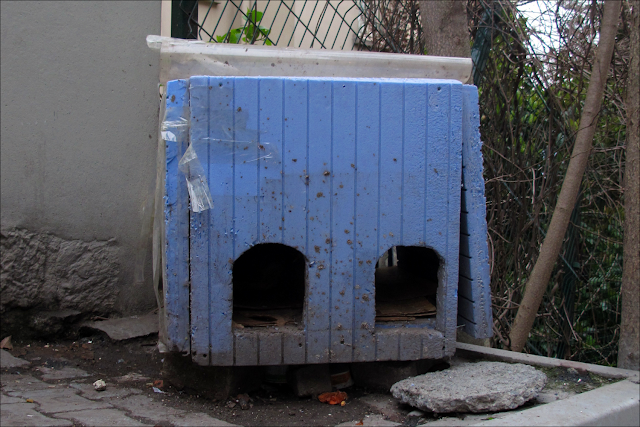 In April 2013 I visited the Aegean town of Şirince. This village is famous in Turkey for managing to preserve traces of its "small town" charm, left by the Anatolian Greeks who were deported from the country in the 1920s. 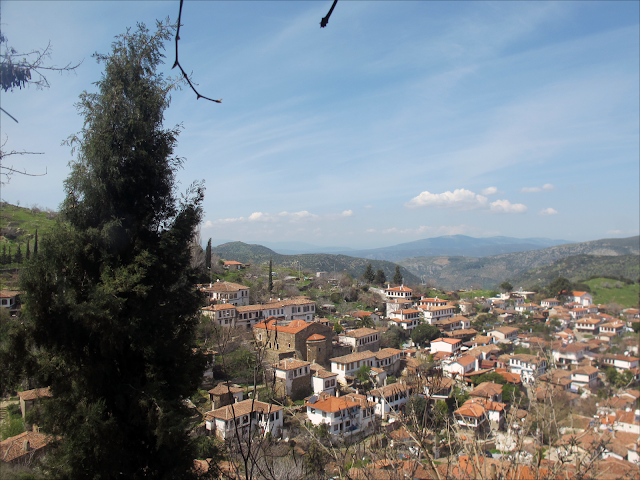 The town owed no small part of this beauty to the preservation efforts of Mr. Sevan Nisanyan, who established an internationally well-known hotel in Sirince; an oasis of calm and beauty in a rapidly devolving a cul-de-sac of banality, ugliness and hubris. 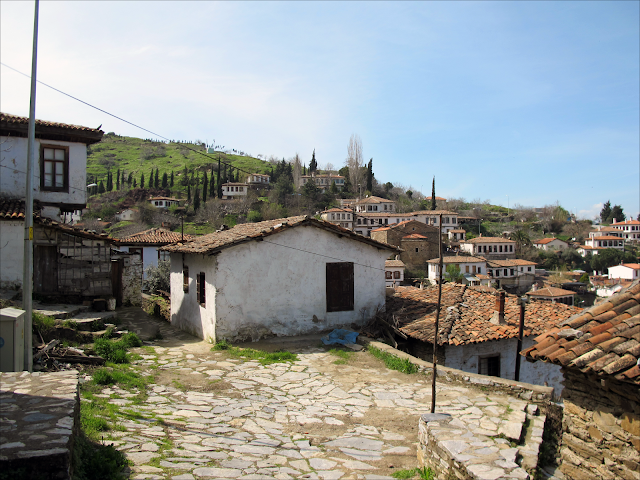 This post, however, is not about the sights and beauties of Şirince, (there are thousands of tourist snapshots online) but rather, some details in it that attracted my interest. Wandering in Sirince's streets, I saw two extraordinary examples of outsider art. 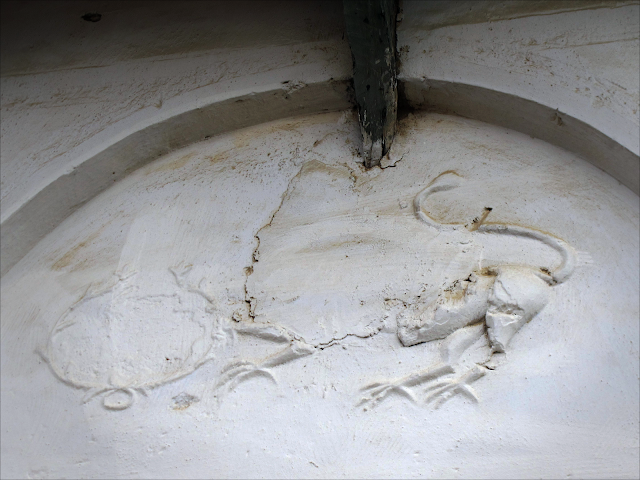 The first was this shattered relief of a dragon or griffin-like creature, perhaps a family crest, that was perched atop the doorway of an old Greek mansion. 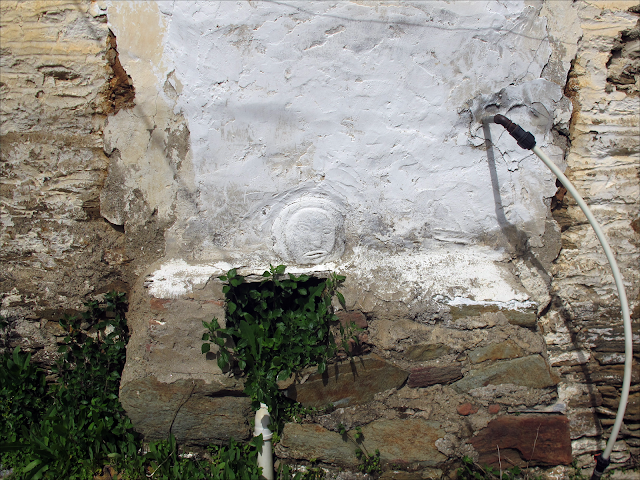 The second was far more interesting. In the narrow back alleys of the town, I saw this… retarded-looking face, staring from a wall. 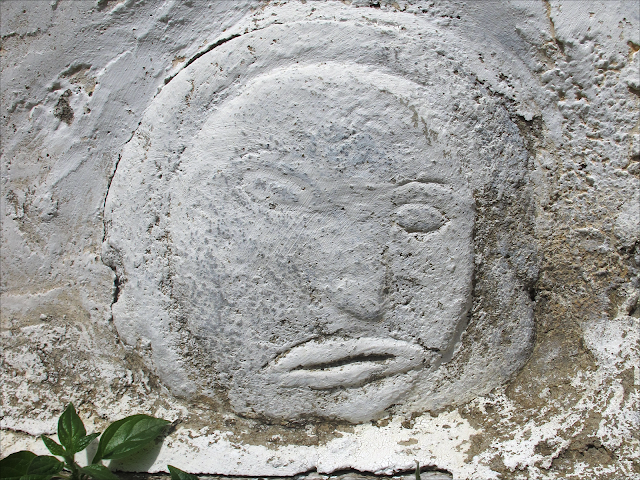 It was covered with layers of paint and I could not figure if it was a relic from the Greek past of
the town, or something more recent, perhaps made by children or a local artist. Its dumpy face reminded me of the infamously "restored" fresco of Christ in Borja, Spain.