Fog in the Bosporus 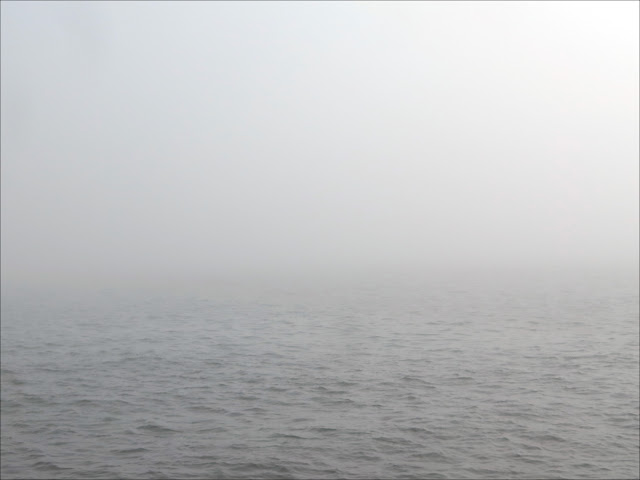 On the 29th of February, 2016, Istanbul was enveloped by a dense fog that lasted most of the day. The Bosporus, normally crowded with boats, was closed to sea traffic and an otherworldly, tranquil atmosphere reigned in the city. 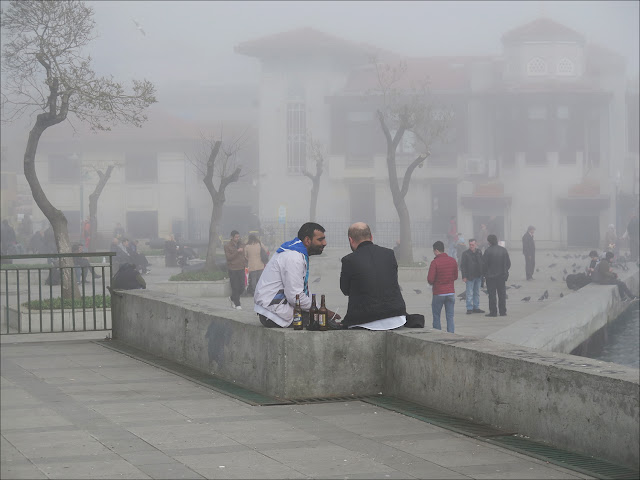 I was near the seaside district of Beşiktaş when the fog became acute. I quickly grabbed my camera and went to the seafront to take pictures. Many other people were also down by the sea, enjoying the strange atmosphere and the dreamy non-view. The extraordinary event put many people in a festive frame-of-mind. These two guys were having a beer binge on the waterside. 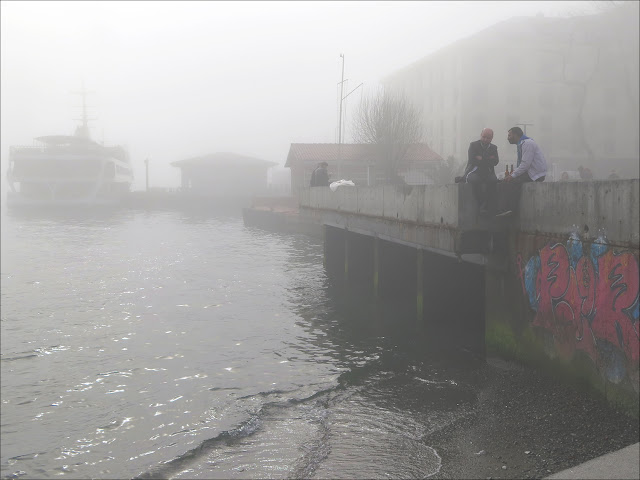 A view of the pier for city liner boats, showing the tiny beach that people sometimes use to swim during the summer. The beer buddies from the previous picture appear in this shot  as well. 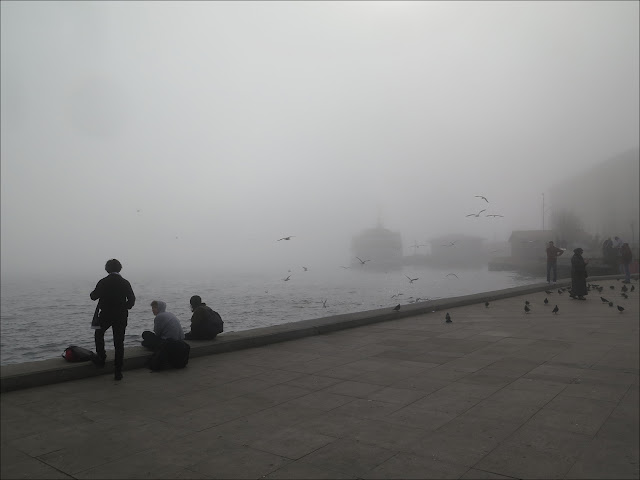 The fog, much like snow, masked Istanbul's chaos and ugliness beneath a magical veil, if only momentarily. 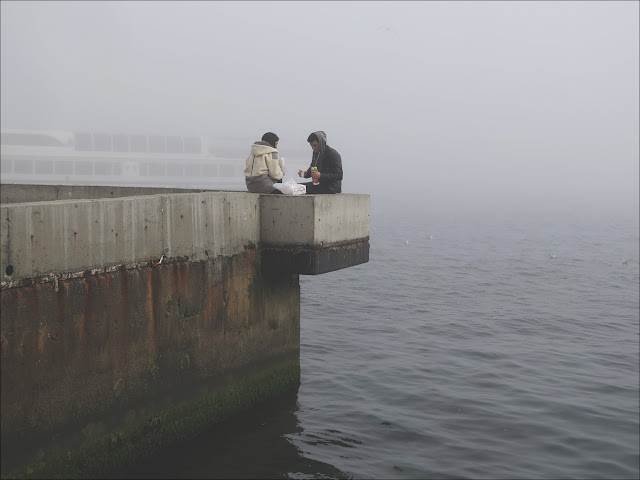 Two friends were having lunch on this ugly concrete "viewpoint" by the sea. Under the fog, however, the architectural abomination had become something beautiful; a balcony overlooking infinity in all directions. 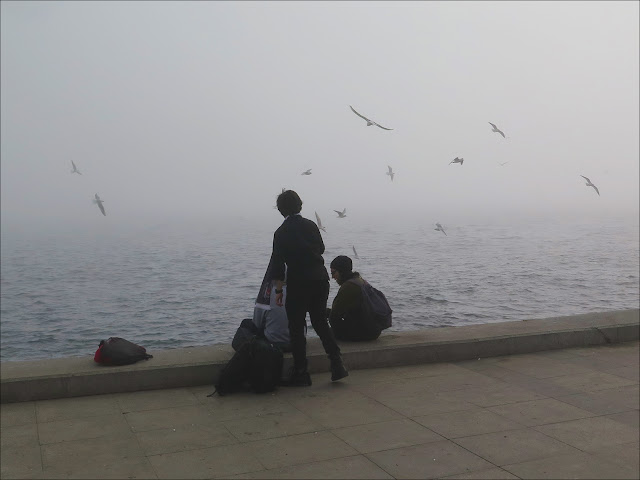 Young people by the sea. 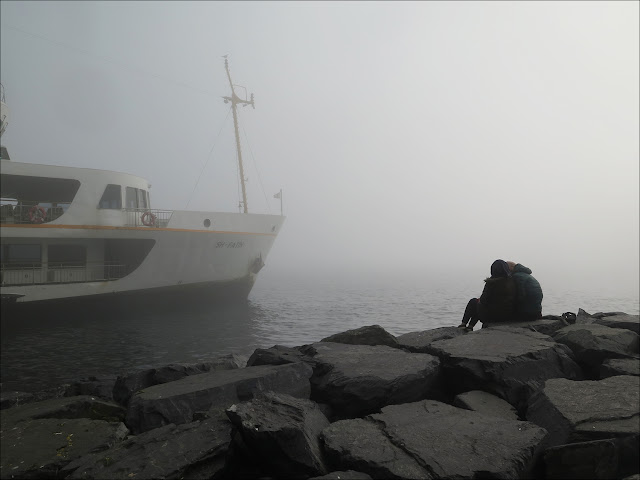 Needless to say, the atmosphere was extremely romantic. Shrouded by the colourless mist, many young couples were hugging, talking or making out. 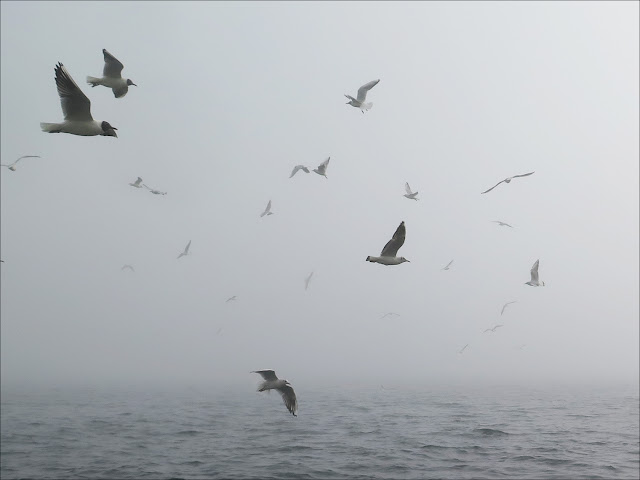 Raucous hordes of seagulls added to the otherworldly atmosphere. These were black-headed gulls, Chroicocephalus ridibundus; and little seagulls, Larus minutus. 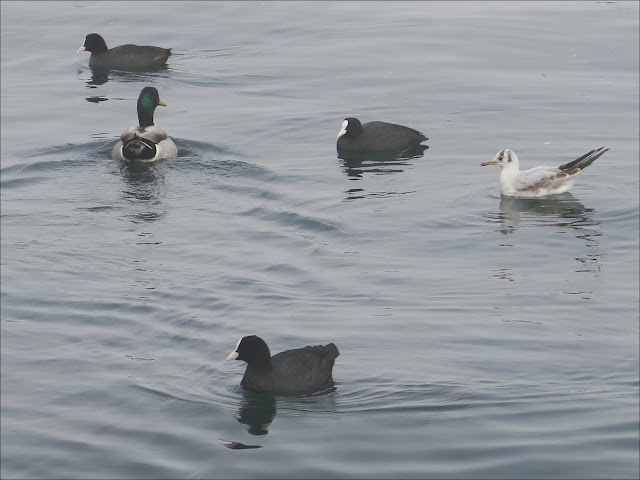 More seabirds: little seagulls, Larus minutus; Eurasian coots, Fulica atra; and surprisingly, mallards, Anas platyrhynchos. The mallards were not natives of the Bosporus, they were kept by nearby fishermen and fed a "healthy diet" of bread and bird feed. 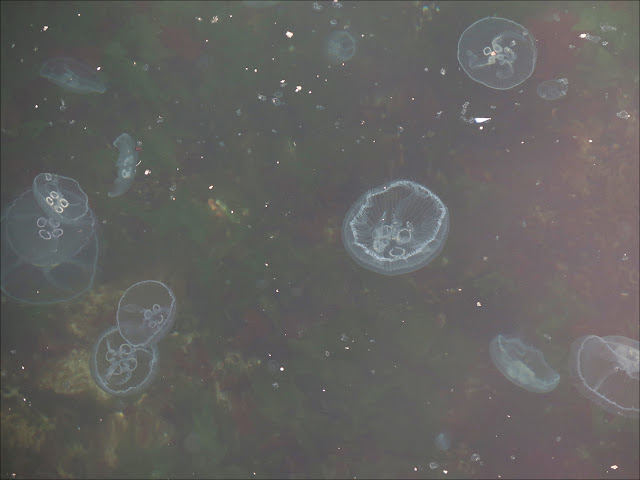 The sea was thick with a bloom of jellyfish. Their population explosion had nothing to do with the fog, it was a result of overall sea pollution. 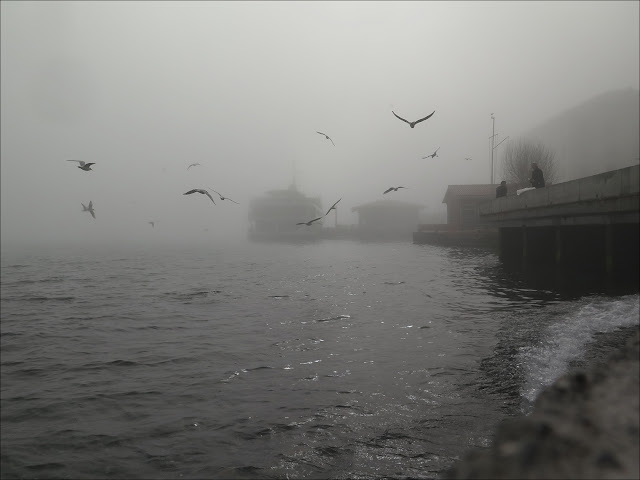 More seagulls and moored boats by the "tiny beach." The air had a cool, moist, yet brisk flavour. 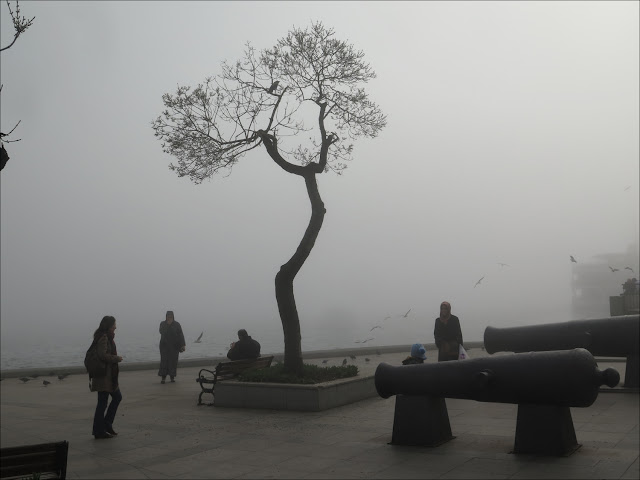 A view from a seaside square, with newly-pruned trees and the beetling hulks of Ottoman-era naval canon. 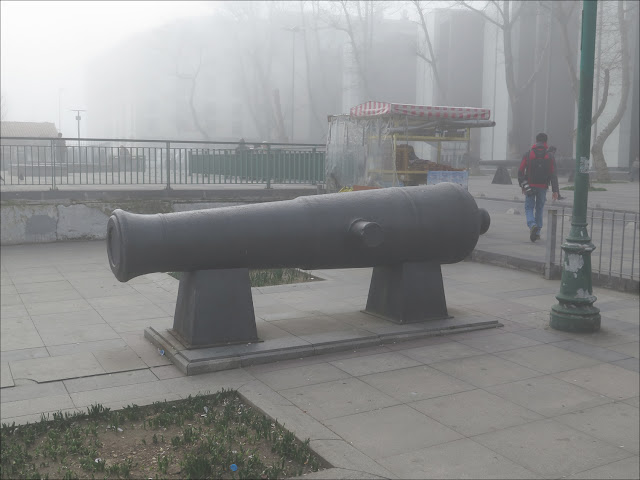 A close-up of one of the large cast-iron naval artillery pieces, used by the Ottoman Empire in the 17th and the 18th centuries. 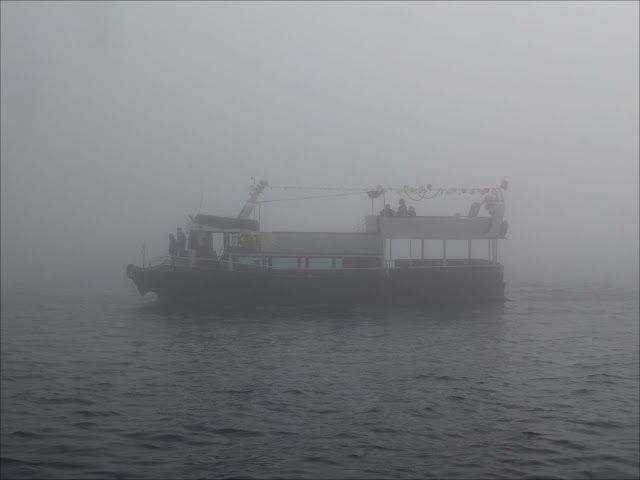 Boat travel in the Bosporus was restricted, but anyone who has lived in Turkey knows that such rules are always broken. This small tour-boat, festively decorated with flags and colourful balloons, was coasting along the seashore. 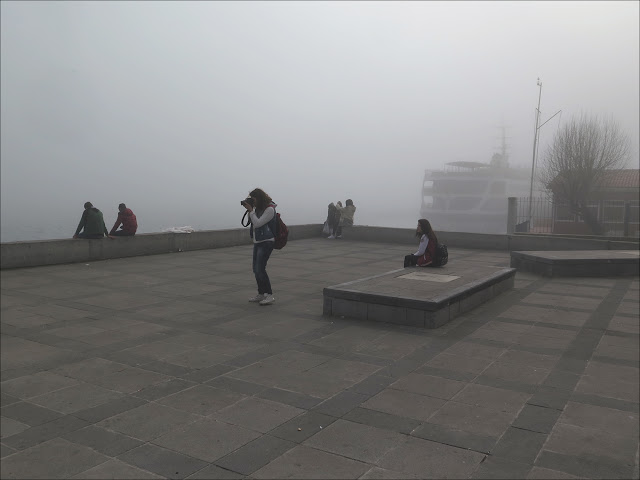 I wasn't the only photographer around. Many people were out and about with SLR cameras, trying to capture the enchanting atmosphere of the fog. 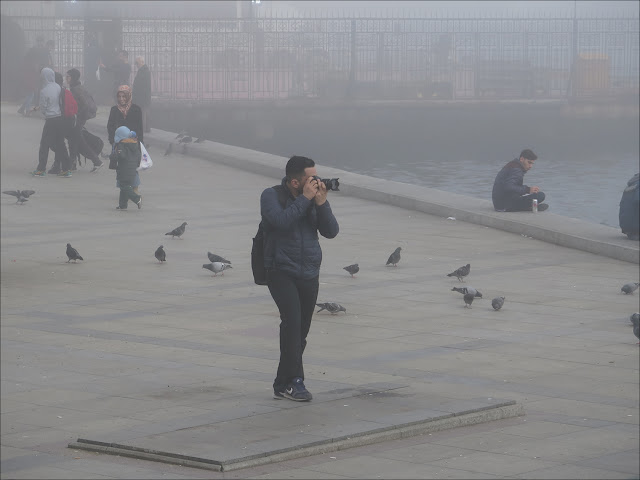 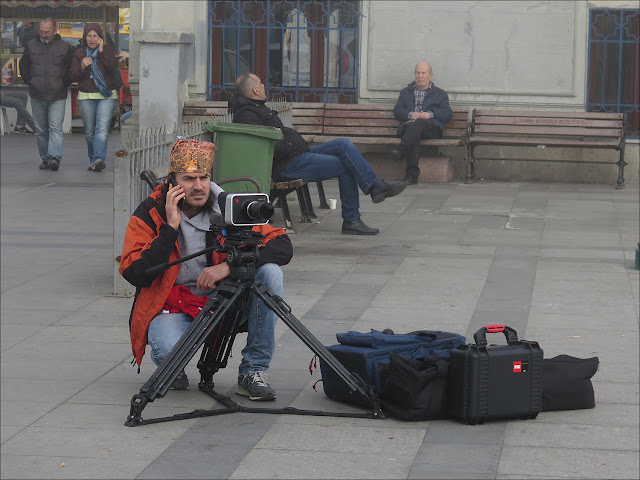 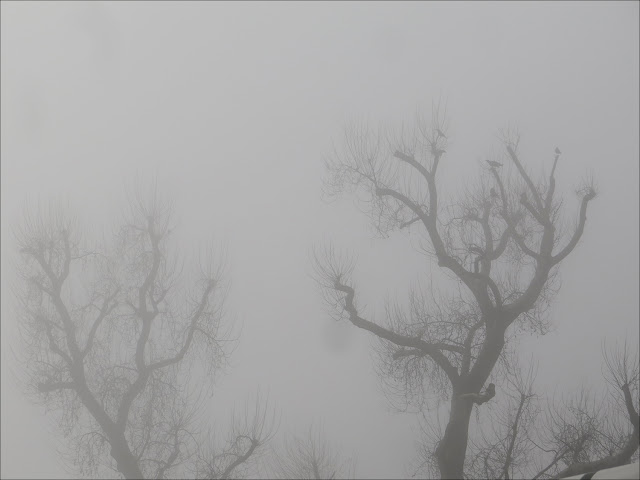 In all, it was a magical day, a nice break from the usual hustle of city life. I considered myself very lucky to be able to go out on a whim and take pictures on a weekday. Many people in Istanbul (and other cities of the world,) are trapped in lock-step existences where they dare not break their daily working routines. 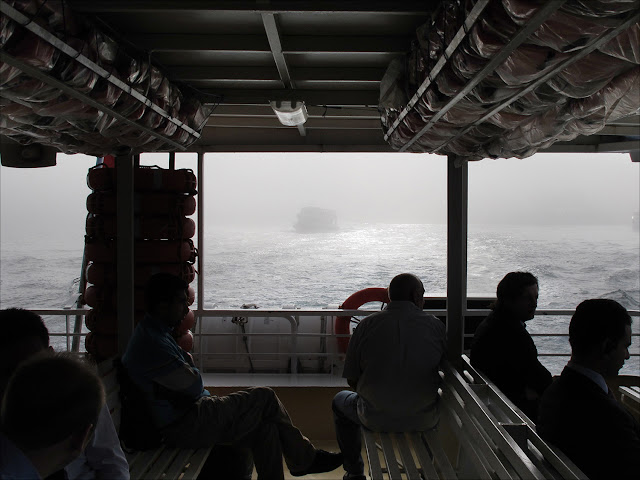 This, by the way, wasn't the first time I had encountered extreme fog in the Bosporus. In 2010, a sudden fog had descended on the city when I was on one of the boats shuttling between the Asian and European sides of Istanbul. 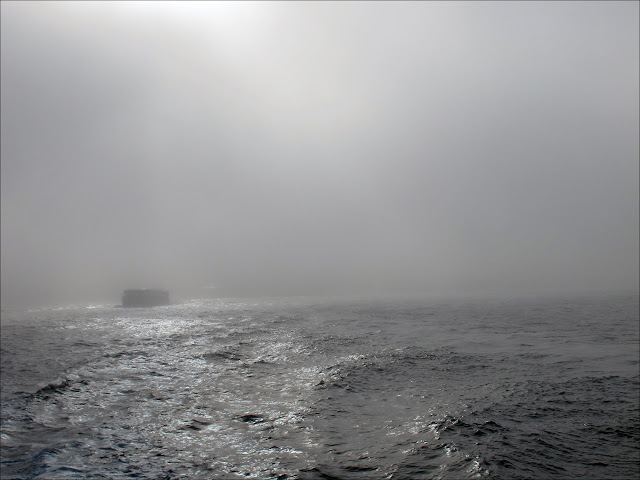 Once more, it was a magical and slightly catastrophic experience. The horizon had disappeared, and the boat, without complex navigation instruments, had reached the European shore on the port of Kabataş, some distance from its intended terminus at Beşiktaş.