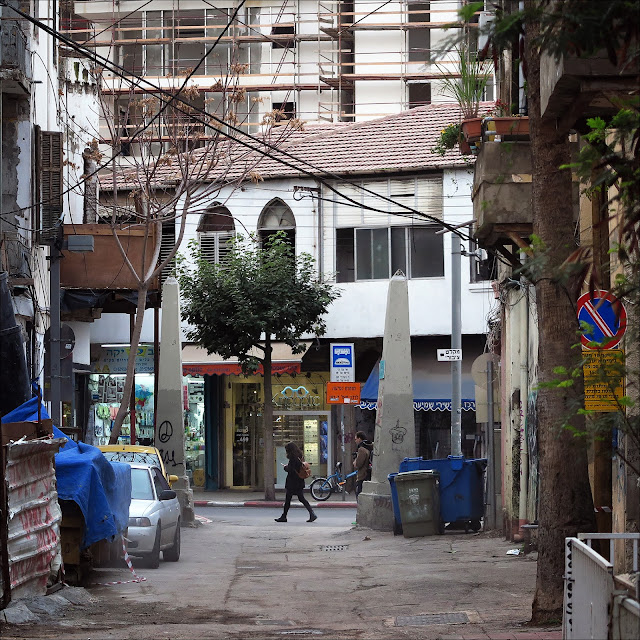 In January 2017, I was walking across Tel Aviv when I came across this arcane dead-end street, its entrance flanked by twin obelisks. 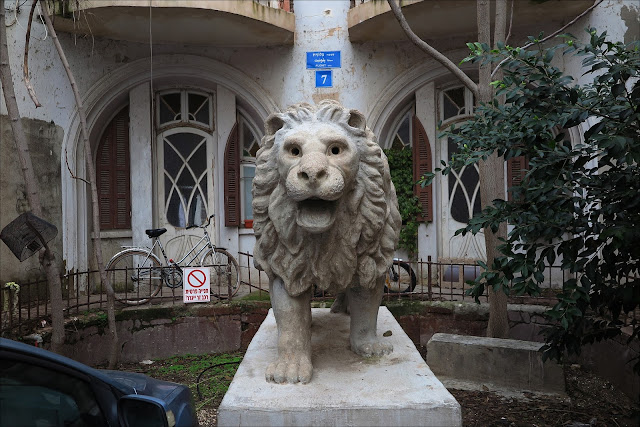 I couldn't read Hebrew, but I later learnt that the parallel dead-end streets were called Anonymous Alley (Simta Plonit) and Unknown Alley (Simta Almonit). I walked in and came across this concrete lion, guarding a splendorous set of art-nouveau apartments. A plaque announced it to be sculpted by "Y D Gordon and Haim Katz, 1920s."

An article in The Towner, an online magazine on urban living and history, shed more light on this mysterious place. According to their sources; the street, the sculptures and the homes were the property of Judeo-American building contractor Meir Getzel Shapira, who "built a three-storey, eclectic-style home in Tel Aviv for his wife, Sonya, and their three children: Naomi, Aybey and Nathan."
As it turned out, the lion statue and the twin obelisks were all built by Shapira to comfort his wife. "Sonya… often complained about the Middle East’s torrid weather, hated that she couldn’t go anywhere without getting sand in her shoes, feared plundering marauders, and was basically miserable all the time. Meir, for his part, tried to cheer her up by throwing money at the problem..."

"One day Sonya came home to find a roaring lion standing in front of her house. It was a statue Meir had commissioned from American sculptor Y. D. Gordon to make Sonya feel safer at home. The beast had lights in its eyes that glowed red at night. That would take care of the plundering marauders. But he didn’t stop there: he also paved the two roads that lead up to the house, so that Sonya wouldn’t have to worry about sand touching her snow-white skin. He then erected two concrete obelisks at the head of the street and hinged a wrought iron gate between them. Finally, he plopped a Yemenite guard in front of the gate and armed him with a stick!"

What a story! I really would have liked to see the concrete lion with the lights in its eyes.

An article on HaAretz also revealed interesting details about the life of Y. D. Gordon. A sculptor specialising in animals and portraits in Greek revival style, he once built "a statue of a rabbi and his students surrounded by animals" at the entrance of Ginosar Pension, a celebrated hotel of the times. But then, "...the rabbis of the first Jewish city protested what they described as a Greek-inspired statue, and imposed a boycott on the hotel. The statue was removed. The frustrated sculptor shattered his creation and left Israel in anger."I also found a datum on Haim Katz on Fickr, which told that this particular statue "...was sculpted by Haim Katz who worked as a builder in Tel Aviv. He was born in Bialystok, Poland and emigrated from Palestine to East London, South Africa in the 1930s."
The pictures below show more details from the apartments and the streets. It's beautiful how research can reveal unexpected life stories in every detail of urban life. 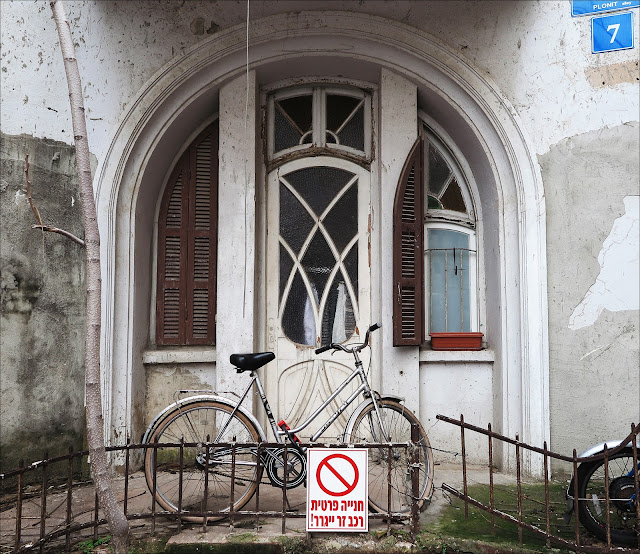 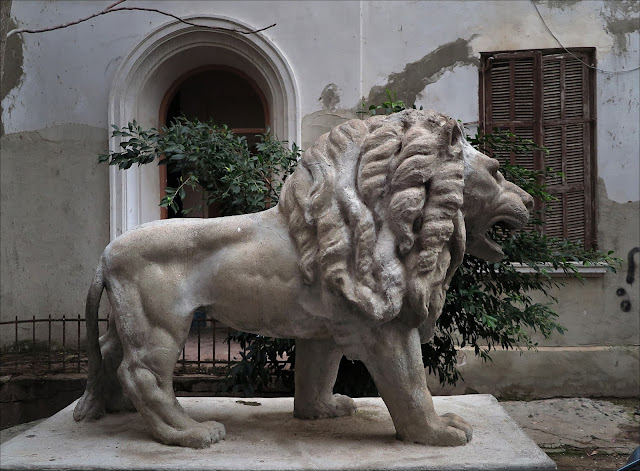 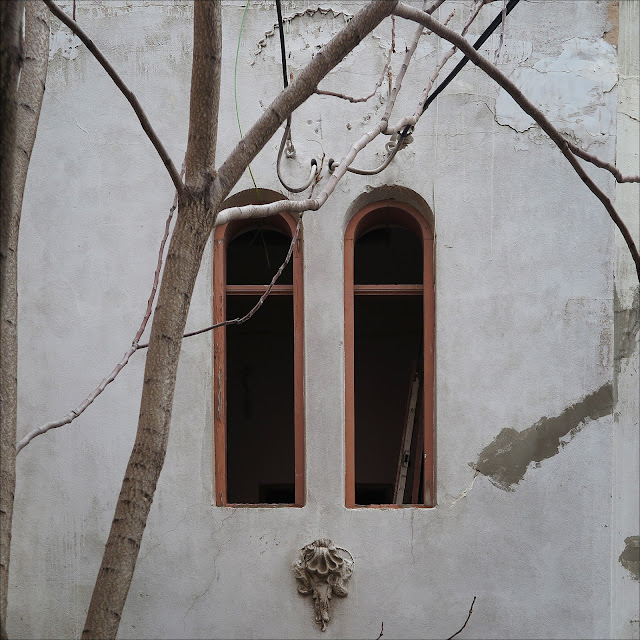 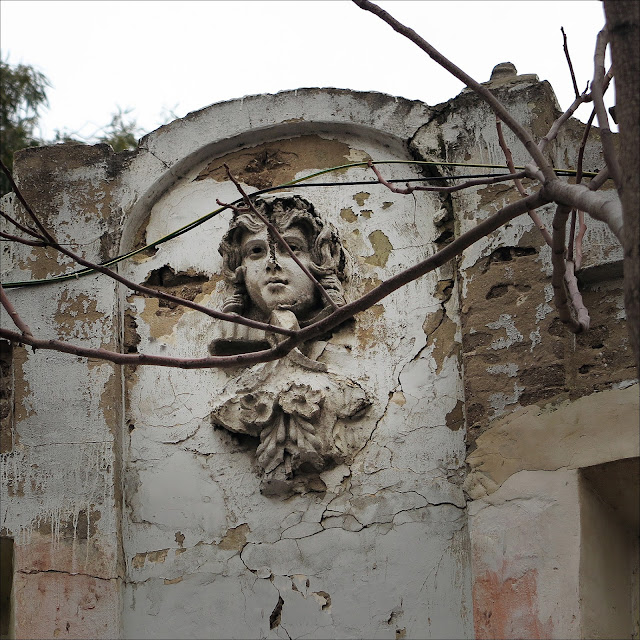 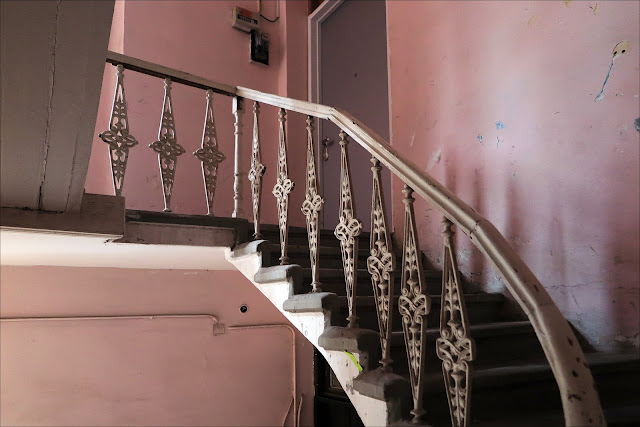 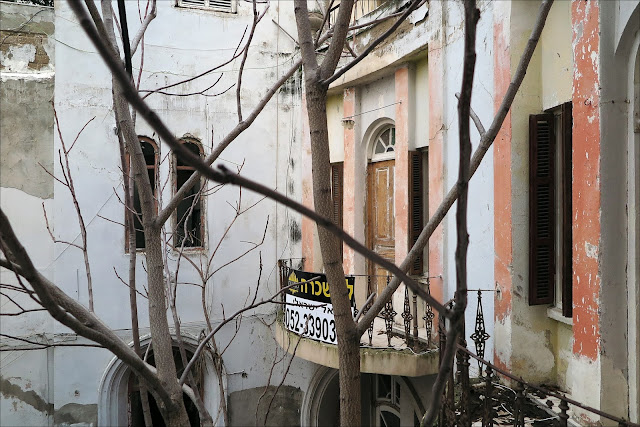