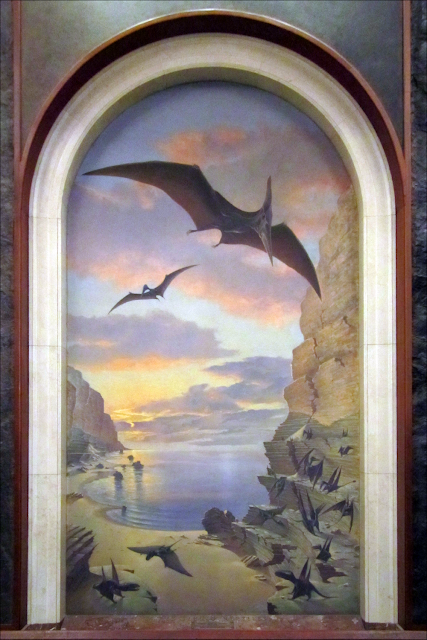 In October 2013, I visited New York's famous American Museum of Natural History with my wife. Among its many wonders, one of the most interesting was this giant, six-meter-tall mural of pterosaurs on an ancient shore.

Executed in 1942 by a certain C. Astori and his assistant A. Brown, the mural depicted most species of prehistoric flying reptiles known at the time.

Leathery shapes were everywhere, feeding on fish remains while the largest forms flew overhead like silent dragons with stick-figure limbs. The sea lapped lazily on the shore, looking more like a giant amoeba than water, undulating with waves of orange, green and blue. Details of the shore, rocks, the and the sky were infused with a sense of antediluvian otherness, an alien planet on the same world.

The piece was mesmerising. Individual animals were rendered in meticulous detail, and each could stand as a beautiful example of palaeoart on itself. Here are some closeups; 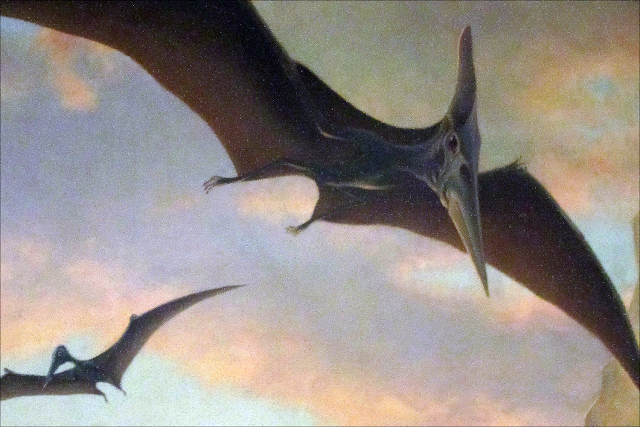 The well-known Pteranodon, and the tailless Pterodactylus looked like demons out of a Hieronymus Bosch painting. These were the largest figures in the mural. 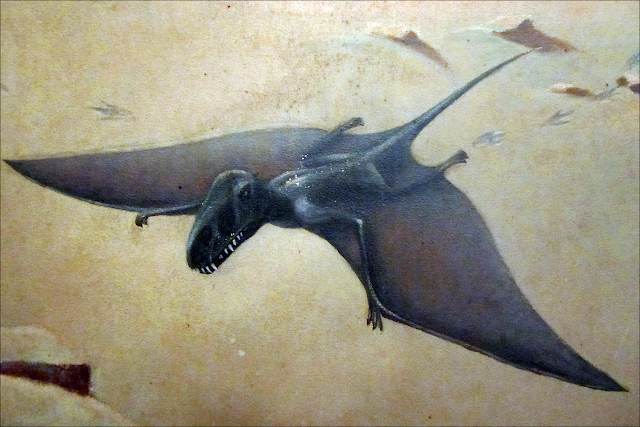 A puffin-headed Dimorphodon flew on the beach, with footprints of other pterosaurs visible on the background. 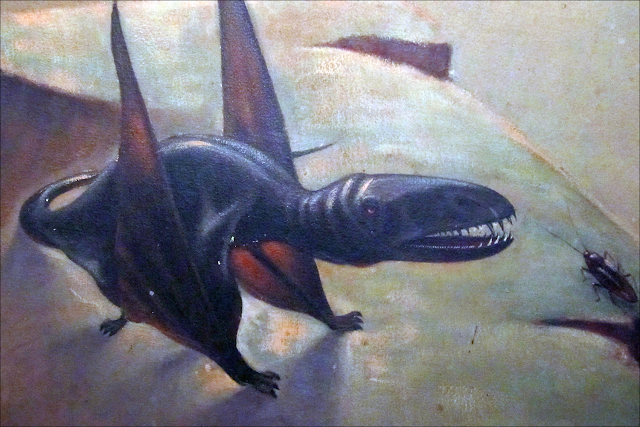 Another Dimorphodon was about to make a meal out of a cockroach, the enduring pest of all ages. Note how each tooth was beautifully rendered. All animals in this mural seemed to be referenced from actual fossils. 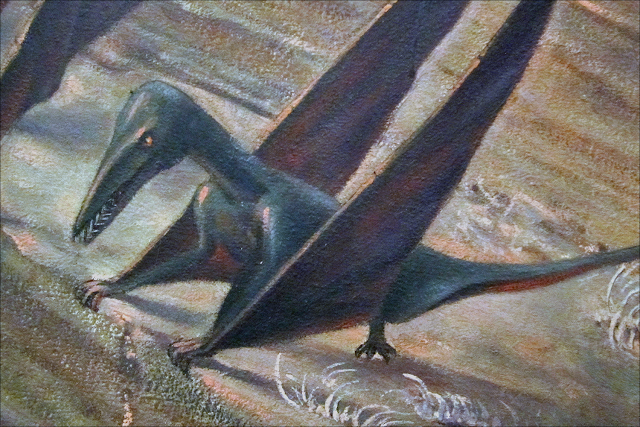 This rather satanic looking critter, on the other hand, was a long-tailed Rhamphorhynchus - one of the earliest-discovered pterosaurs. It was standing among a pile of fish bones - the remnants of its lunch. 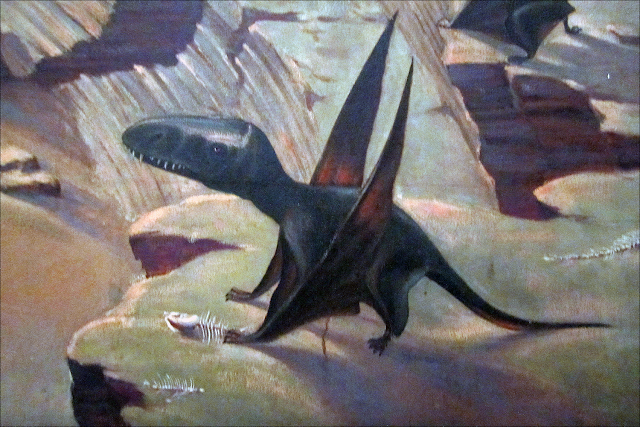 Everyone was having fish for breakfast, lunch and dinner! This was another Dimorphodon. 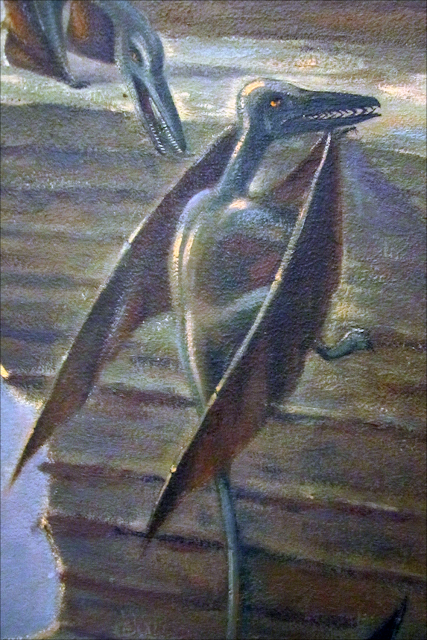 Another Rhamphorhynchus was hanging on a cliff-side, rather like a giant, reptilian bat. Pterosaurs have such unusual anatomies that for a long time, scientists were unable to guess how they got about on land. The "bat hypothesis" was one of the more popular ideas during the early years of pterosaur research. 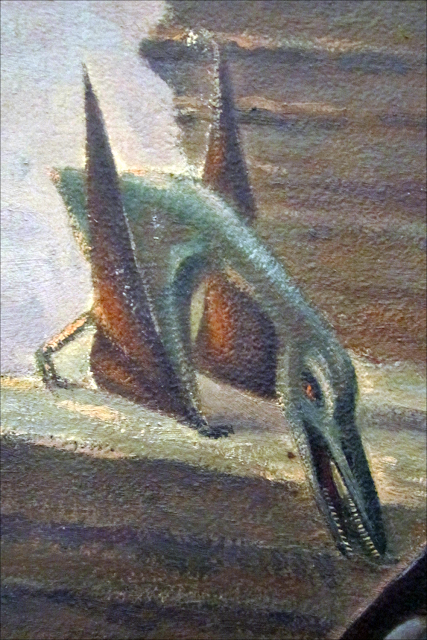 Another Pterodactylus reached down from its perch. This was one of the smaller and wonkier figures in the mural. 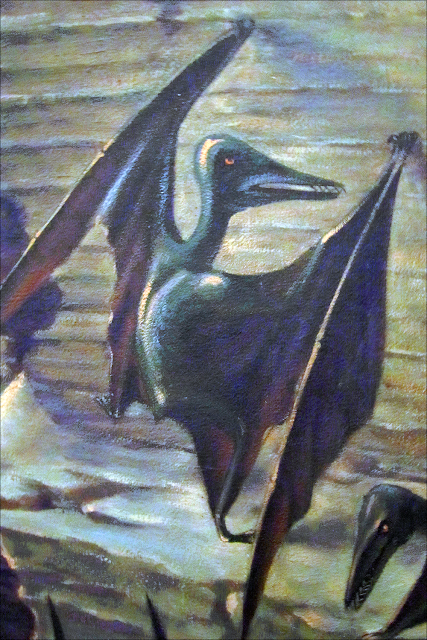 This animal was also supposed to be a Pterodactylus. The reason for this multitude of Pterodactyli was that during the 19th century, every flying reptile with a long-ish snout, no crest and no tail was lumped into the Pterodactylus genus. Today, the classification of these animals has gotten very complicated - individual species seem to look very different at different stages of their growth, but there were also a lot of separate species that looked quite similar to one another.

On another note, the head of this figure seemed to be borrowed from an earlier engraving of Rhamphorhynchus by the French illustrator Édouard Riou. 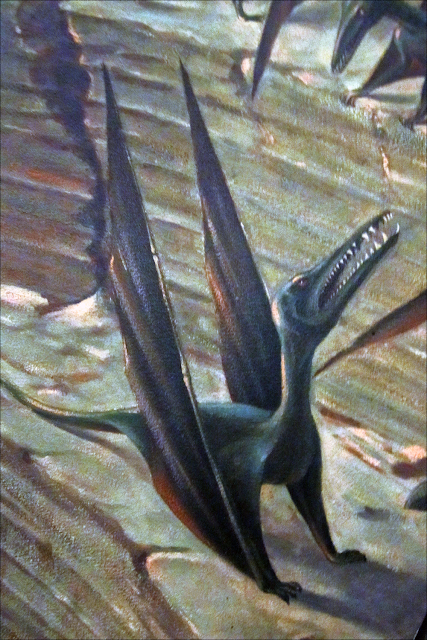 A Rhamphorhynchus, or perhaps a Dorygnathus, shouted angrily at one of its cousins. 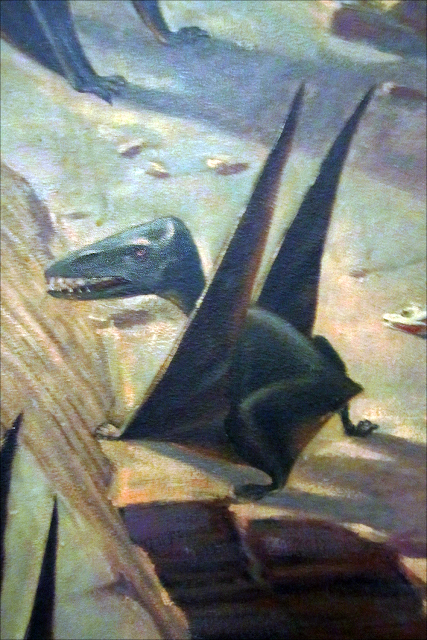 I'm at a loss to identify this one. Its head resembled a Dimorphodon or a Dorygnathus, yet it had no long tail and its body looked like that of a Pterodactylus. It was possibly referenced from an obscure fossil of a different genus. 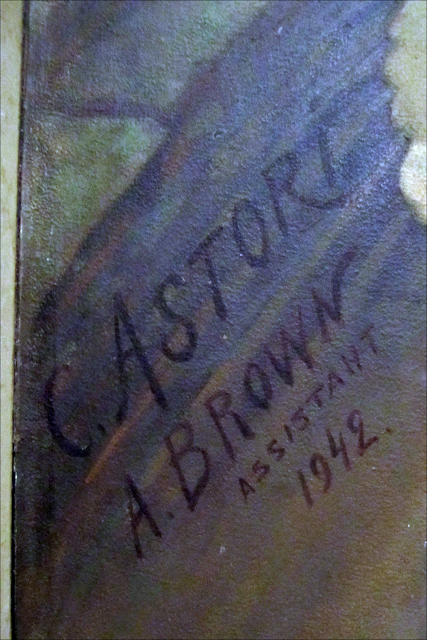 Finally, these were the signatures of C. Astori and his assistant, A. Brown. An internet search revealed more information about Constantine Astori. He was a Russian artist who had come to America in the late 1920s. Before that, he lived in Istanbul after fleeing the Bolshevik revolution in 1917. Imagine that - a hundred years apart, a fellow prehistoric artist in my own city! A New York Times article credited him with "causing who knows how many millions of children to suffer nightmares over the last 60 years." Not much else is known about A. Brown.

This spectacular mural is sadly under-represented in the online world. I hope this post has somewhat corrected this situation.